The first weekend of December (04/11/21 - 05/11/21) was a busy one for the club and West Wales region, as Carmarthen Harriers hosted a successful cross country league fixture back in Carmarthenshire as well as athletes winning regional medals and representing Wales in Pembrey / Cardiff / Glasgow.

The events at Pembrey and Cardiff incorporated the West Wales Cross Country & Indoor Championships for all junior, senior and master age groups.

Read on for the weekend round-up and all the club results...

The John H Collins Gwent Cross Country League, one of the most popular grassroots cross-country leagues in the UK, returned to West Wales for the fifth time on Saturday 4th December.

1,200 runners of all abilities descended on Pembrey Country Park near Llanelli and races featured the under 11 athletes right up to the seniors and masters' categories.

Local club, Carmarthen & District Harriers Athletics Club hosted the third of five fixtures this season. The club were grateful for the support offered by Carmarthenshire County Council in hosting the event in their park. 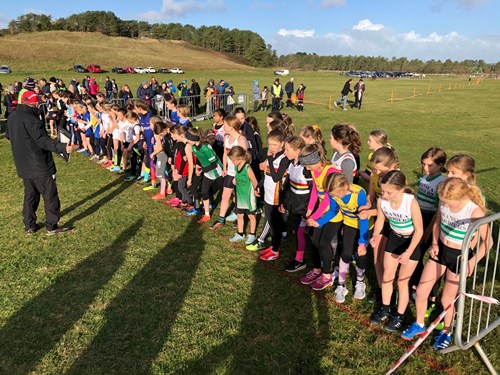 The league season began back in October when Llandaff Fields in Cardiff played host to the first British Athletics Cross Challenge Series as well as the John H Collins Gwent Cross Country. This was followed by the second meeting in Mid Wales at Parc de Pugh in Brecon three weeks ago.

Competitors, coaches, team managers, officials and spectators from more than 40 clubs travelled to the Carmarthenshire park from across South Wales and the South West of England.

On a demanding course that showcased the counties park and the surrounding areas, the competitors aged 9 to 80 tackled fast grass sections, hills, sand dunes, woods and paths. Participants had the opportunity to take in some breath-taking views around the route overlooking the coastal scenery of Carmarthen Bay and the Gower.

In addition to runners scoring points for their clubs, Pembrey also hosted the West Wales Cross Country Championships 2021 where regional medals were presented to the top three athletes from the region to finish in the junior, senior and master age groups. 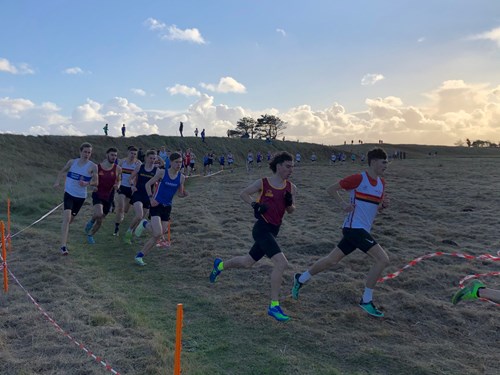 The action got underway on Saturday morning with the novice age groups running a total distance of 1,600m. The ten-race programme was followed by the under 13, under 15 and under 17 and 20 races (girls and boys) completing either small, medium or large laps.

In the latter part of the afternoon, the Senior & Master Women and Men ran their respective distances of 7,300m and 9,800m. There were big fields once again and plenty of support out on the course. 667 participants crossed the finish line in these two events.

Meanwhile in the Senior Men’s race, Joshua Griffiths from Swansea Harriers led from the gun to finish in first place in 29:32. Felix McGrath 30:23 and Tony Orvain 30:39, both from the Bristol and West Athletic Club, made up the top three positions.

The 2021/2022 John H Collins Gwent Cross Country League will visit Blaise Castle in Bristol in the New Year on Saturday 19th February 2022, before the season ends at Singleton Park in Swansea next to the Mumbles seafront on Saturday 19th March.

We hope that all clubs, athletes, officials and spectators enjoyed your visit to West Wales / Carmarthenshire and had a safe journey to and from Pembrey.

A home event for the first time in two years - it was a great opportunity for new and established Carmarthen Harriers junior and senior members to compete on home soil at a familiar venue in the county.

The club had fifty-four members attend the third fixture at Pembrey Country Park and produced some good results on a challenging course.

Well Done to all athletes listed below, and a big thank you to the parents, team managers and coaches who also supported the event in a number of ways, including marshalling the course and clearing up the venue afterwards / Da iawn i'r athletwyr i gyd wedi rhestri isod a diolch i'r rheini, rheolwyr tim a hyfforddwyr wnaeth cefnogi mewn nifer o ffyrdd ar y diwrnod.

The event wouldn't have been able to happen without your contributions!

Wendy also ran at the Merthyr Mawr Christmas Pudding Run in Bridgend on Sunday, finishing in a time of 50:33.

Isaac also ran at the Cambrian News Aberystwyth Charity 10K on Sunday, finishing in a time of 35:15.

Sixteen Welsh school pupils made the journey to Scotland to represent the Welsh Schools Athletic Association at the 2021 British Schools Indoor Combined Events International (SIAB), held at the Emirates Arena in Glasgow.

The International were for athletes in the under 16 and under 18 categories. The Welsh Schools squad were up against the top runners, jumpers and throwers from English Schools, Irish Schools and hosts Scottish Schools. 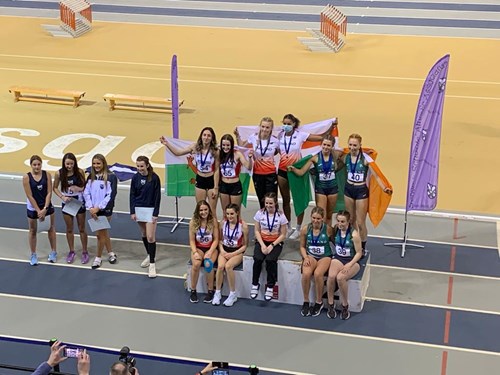 Well done to Jessica Lee, from Ysgol Dyffryn Taf in Whitland who was selected and won her second Welsh vest in less than three months, following her third-place finish in Cardiff. Finishing fourth individually with 3545 points in Glasgow, she helped the Welsh Schools under 18 girls win bronze medals in the team event. There were also third-places for the Welsh Schools under 16 boys and under 16 girls age groups whilst the under 18 boys were fourth.

The Indoor Athletics season for junior athletes got underway on the first weekend of December with Day 1 of the Welsh Athletics Junior Indoor Open (Under 13, Under 15 and Under 17 age groups) at the National Indoor Athletics Centre - Cardiff Met, Cyncoed Campus. 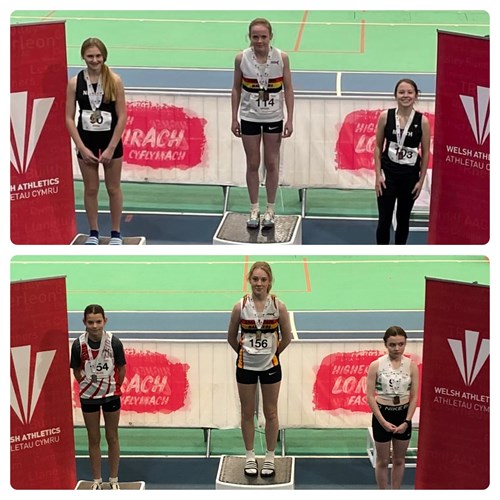 Following the same format as in previous years, the Welsh Athletics Junior Indoor Open fixtures in 2021/2022 incorporates the West Wales, East Wales and South West England Regional Championships for all track and field disciplines this year.

Gold, silver and bronze medals were presented on the podium to the top three in all events for West Wales, East Wales and South West England Regions.

Beatrice Morgan and Luned Defis from Carmarthen Harriers travelled to the Welsh Capital to run the 200m and jump in the long jump and high jump, returning home with 2 gold and a bronze medal between them.

Day 2 of the Welsh Athletics Junior Indoor Open (U13, U15, U17) will take place at NIAC in the New Year on Sunday 9th January. Events that day will feature 60m and 60m Hurdles, 800m and 1500m distance events as well as the Long Jump, Shot Put and Pole Vault in the field. 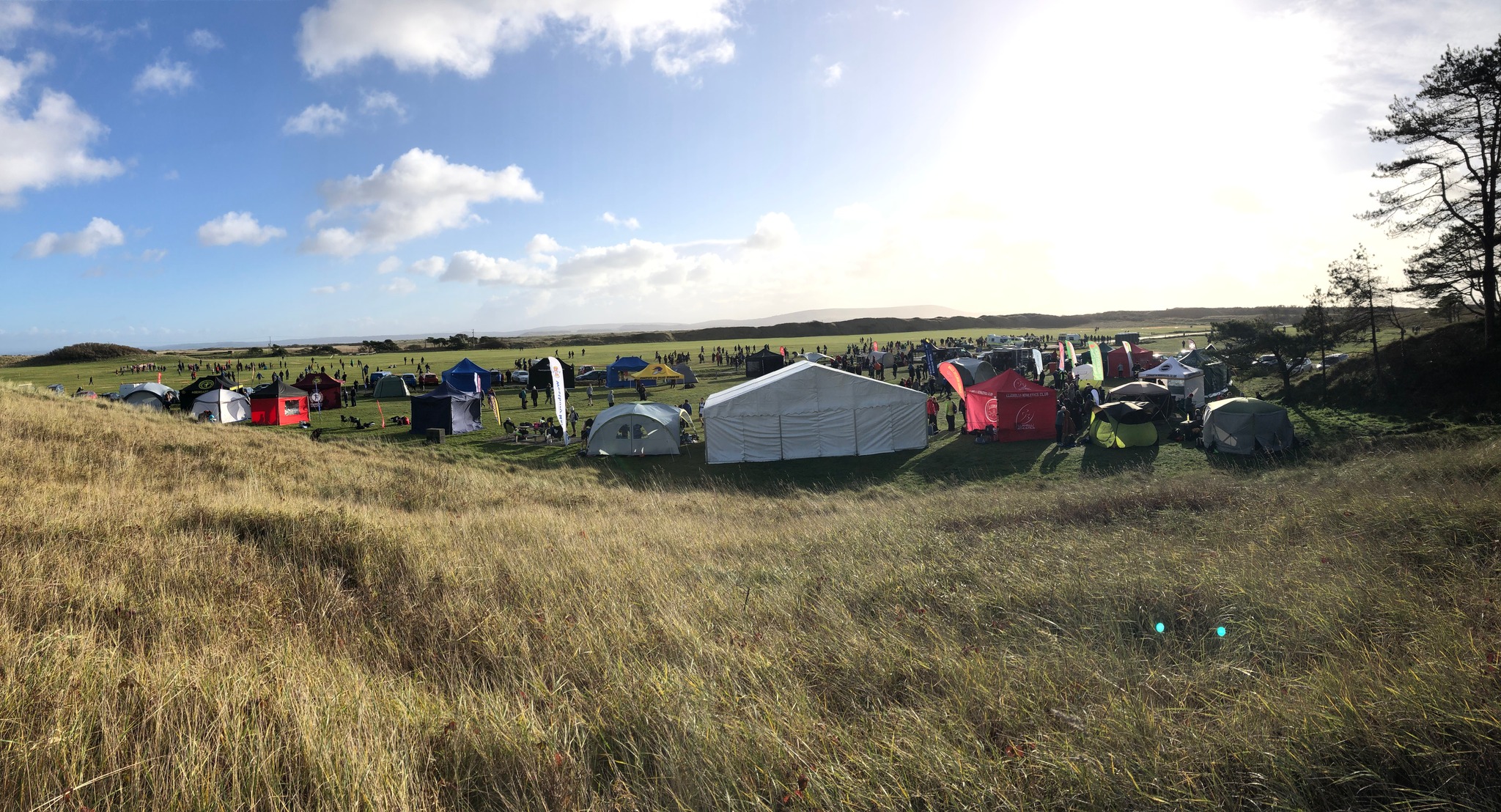