The London Mini Marathon for 11 to 17 year old children hosted a series of age group races covering the last 2.6KM of the London Marathon route and featured around 200 participants in each of the races. Athletes started at Temple Place and finished at the world-famous Finish Line on The Mall. 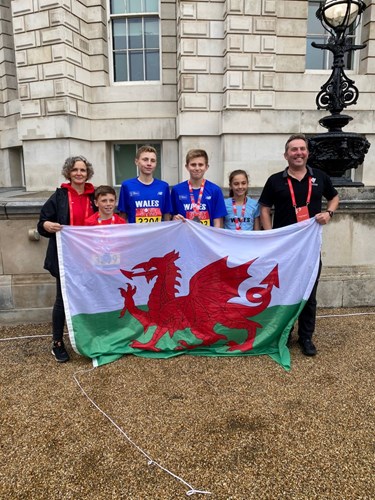 It provided an opportunity for young athletes from Wales to test themselves against the best in Great Britain & Northern Ireland, competing against the other Celtic nations, the powerful English regions and athletes from 33 of the London boroughs.

After the event was cancelled in 2020, it was fantastic to see six athletes chosen to represent Wales in each of the under 13, under 15 and under 17 age groups from twelve different clubs. Selection was made based on current form in the 2021 Track and Field season and previous Championship performances.

This was the second International fixture in the space of a week after Welsh Schools runners, throwers and jumpers travelled to Derby for the 2021 SIAB Schools U17 Track & Field Cross Country International last weekend. 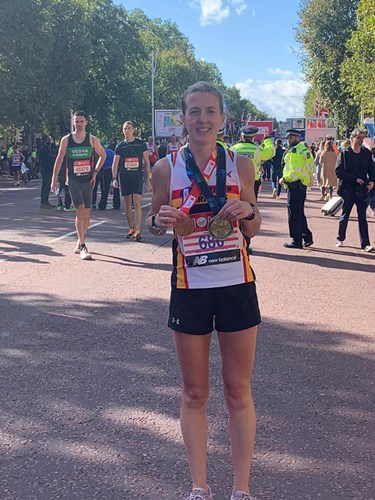 Carmarthen Harriers Athletics Club have had members selected in this event over many years, and this year was no different.

After recording fast times on the track this summer, four junior endurance athletes made their debut in a Welsh vest at this year's Virgin Money London Mini Marathon with two named in the under 15 boys age group and one each in the under 13 categories.

In the British Athletics Road team championships (4 to score), the best scoring Welsh team came in the under 13 girls and boys' age groups who finished in 4th and 5th respectively.

The main 26.2-mile Virgin Money London Marathon saw thousands of elite and novice runners take to the start line, 40,000 in person in London and also around 50,000 completing the distance virtually around the world.

One of our current active senior members, Wendy Price also took on the challenge of running the marathon. Running in the V40-44 category, Price complete the race in 3 hours 8 minutes and 17 seconds which was an improvement on her time on the same course in April 2019 by almost two minutes. This time saw her place 52nd overall in her category and secured a new personal best.

Congratulations to all five club athletes on their performances (and their coaches) as well as all those who ran over the weekend either in London or virtually around the county of Carmarthenshire and West Wales region!

Virgin Money London Marathon 2021: Find out all the finishing times and search for an athlete by name or number in the Marathon by clicking here

Virgin Money London Mini Marathon 2021: Find out all the finishing times and age group results in the Mini Marathon by clicking here