With a newly upgraded athletics track completed and officially opened in November 2020, Hedydd Davies, president of Carmarthen and District Harriers Athletics Club, looks back at the history of Carmarthen's track.

Carmarthen Town Park was the venue in Carmarthen for many years for cycling and athletics events  Very well attended events were held in the Park every Easter and August Bank holiday Mondays.

Carmarthen and District Harriers Athletics Club was formed in April 1948 with Ron B Evans as its chairman, a position which he held until 1981 when Hedydd Davies became chairman and remained in the post until 2017. 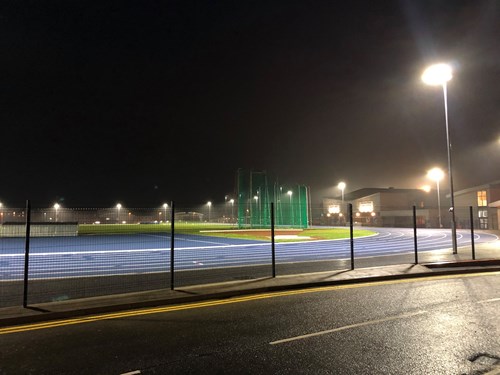 In 1954 the Welsh Colts and Youths championships were held in the Carmarthen Park on a horribly wet day.

During the 1950’s Carmarthen Harriers members trained on the grass in Carmarthen Park and the excellent Trinity College Playing Fields in Johnstown.

In this period there were very few athletic stadia in Wales and the annual Welsh Championships were held in the Maindy Stadium in Cardiff. After the British Empire and Commonwealth Games in the Arms Park Cardiff in 1958 the cinder track there was transferred to Maindy Stadium.

Many well known Welsh athletes competed at the opening event in 1964 and a large crowd was in attendance.

The Welsh secondary schools’ athletics championships were held on the Track at the Ystrad Tywi School site in 1966.

Ron Evans organized many top class events at this cinder track with many British internationals competing. Lynn Davies the 1964 Olympic long jump champion broke the GB long jump record at the Carmarthen Track but was not ratified as the runway was slightly downhill.

The Ystrad Tywi cinder track was well used in the 1970’s by Carmarthen Harriers and Carmarthenshire/Dyfed secondary schools and many Welsh League matches were held at the Carmarthen cinder track.

The 1967 and 1970 Welsh Marathon Championships were held in Carmarthen with the start and finish on the Carmarthen Athletics Track.

However, the Ystrad Tywi cinder track began show its age. It was almost impossible to use it in the winter months and in the summer, it was too hard and flooded very easily.

To maintain its position in Welsh Athletics it was soon realized that Carmarthen had to upgrade its athletics facility.

The submission was supported by John Phillips the Dyfed Director of Education.

However, at the February 1987 Dyfed County Council Education Committee meeting there were two projects under consideration for one grant.

The vote was 12 for the Carmarthen Athletics Track and 12 for the indoor toilets at St Dogmaels primary school.

The Chairman Cllr AD Lewis from Aberystwyth cast his casting vote in favour of the Carmarthen Athletics Track project.

Carmarthen District Council, Sports Council for Wales and Carmarthen Town Council were also asked for grants towards the cost of installing an all-weather running track adjacent to the Carmarthen Leisure Centre and QE Maridunum School.

In the end grants totaling £166,000 were obtained as follows:

Tenders were invited for the project and Master Sport were successful. Peter Turvey from the Dyfed County Council’s Architect’s department was responsible for overseeing the work.

The work on the track commenced in July 1987 but came to a stop in October that year. It was not possible that year to lay the top surface and to complete the work.

Work recommenced in April 1988 with the aim for the new synthetic track to be ready by June that year with an opening ceremony planned on the day of the Dyfed AA championships on Saturday 4 June 1998.

It was touch and go to finish the new track on schedule with grass in the centre of the track at least 20 cm tall in the week before the opening event.

After the opening ceremony, the Dyfed AAA championships were held with many international athletes competing.

Highlight of the afternoon was Carmarthen Harrier Bob Brierley’s attempt to break the over 70 British record for the 1500m.

Value of the Carmarthen Athletics Track in the period 1988-2020

For a long time, the Carmarthen Track was the only all-weather synthetic track in Dyfed. A new track was installed much later at Sir Thomas Picton School Haverfordwest and at Parc y Scarlets, Pemberton Llanelli

Ceredigion is still without a synthetic running track and the Ceredigion secondary schools’ championships are always held at the Carmarthen Athletics Track.

Below is the list of major athletics events held in Carmarthen on the synthetic Track at Johnstown.

All events from 1988 on the new Carmarthen Athletics Track

Facilities at the Carmarthen Athletics Track

Carmarthen was extremely fortunate to have the new Track in 1988 otherwise the major events listed above would not have been held at Carmarthen.

Without the support of the Councils and the Manager and staff of the Carmarthen Leisure Centre it would not have been possible also to provide the opportunity for young athletes from a very wide area to take part in organized athletics competition.

However, it was soon realized in 1988 that that the new Track was short of the following supporting facilities

It took many years, a lot of hard work fund raising and with the support of many organizations to provide the following improvements:

Floodlights around the whole track

In 2020 there has been a major refurbishment of the facilities at the Carmarthen Leisure Centre.

This has involved the resurfacing of the Carmarthen Athletics Track and its upgrading to an 8 lane running track suitable for major athletics in the future.

Carmarthenshire County Council are once again are to be congratulated on their investment in sport and the healthy wellbeing of not only that of the local community but also of a wider area.