The final indoor track and field event before Christmas took place in the Welsh Capital on Sunday, as two club records were broken in the 3000m.

The Cardiff Met Christmas Classic Grand Prix competition was back in 2021 on Sunday 19th December, described as the UK’s Number One Christmas Themed indoor track and field meeting. It was held at the National Indoor Athletics Centre at Cyncoed Campus in Cardiff. 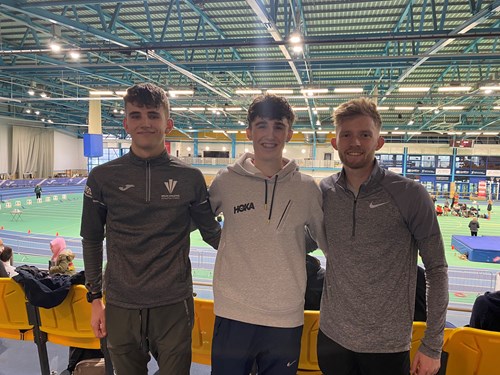 Seven Carmarthen Harriers members travelled up the M4 to Cardiff to compete in the final indoor fixture of the year over the weekend.

In the field, Beca Roberts competed in the women's triple jump in the first event of the morning and jumped a best of 11.33m in the second round.

Thomas and Jones' times were confirmed as new Carmarthen Harriers club records for the senior men's and under 20 men's 3000m, previously set by Dewi Griffiths thirteen years ago in 2008. Llongyfarchiadau Ben a Dafydd!

Lewis Evans and Ellie Loweth were in action in the men's and women's 60m sprint where they crossed the line in 7.25 and 8.23 respectively. Loweth also ran 44.22 in the women's 300m earlier in the afternoon.

The Welsh Athletics Regional Development Day 2 was planned to take place at four venues across Wales on Saturday, including the West Wales Regional Day at Carmarthen Athletics Track. Unfortunately due to the increase in Covid-19 cases across the country, the decision was made to postpone the day to a re-arranged date (TBC).