After the success of the Welsh Schools National Track & Field Championships in Cardiff, which played a part in the Urdd's "Gemau Cymru" Sports Festival last weekend, it was the turn of school teams to make the most of their opportunity during this busy period of the season. At arguably the biggest grass roots competition for secondary schools in the summer term, the NASUWT Cymru Wales Cup & Plate Finals took place at the Penlan Arena Track up in Brecon earlier today (Wednesday 10th July).

The cup competition has been organised each year since 1988 while the plate final was added in 2007. A total of thirty-six schools from across the eight districts in Wales - Afan Nedd Tawe, Cardiff & Vale, Dyfed, Eryri, Glamorgan Valleys, North East Wales, Powys and South East Wales - qualified to field sixty-two teams at the final. Each district had one team in the cup competition and one team in the plate competition. 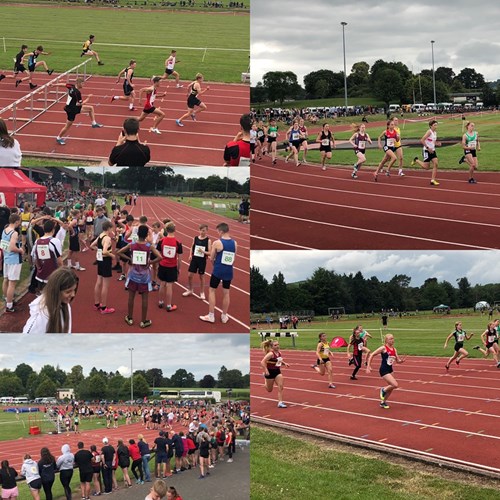 It was split into two sets of age groups - the under 14's for year 7 & 8 pupils and the under 16's for year 9 & 10 pupils. Rather than an individual competition, this was more of a complete team effort this time round with each discipline on the track and field counting to determine who came out on top.

Geraint Davies, representative for NASUWT Cymru said: "As the largest teachers union in Wales, the NASUWT is proud of its long standing connection with the NASUWT Cup."

"Over the years, the competition has given thousands of youngsters from schools across Wales the opportunity to perform at the highest possible level and as an union, we are delighted that our support has contributed to making that possible."

All team captains gathered outside the pavilion following the conclusion of the final relays all eager to find out how their school team got on team wise.

It turned out to be a great day of junior athletics up in Mid Wales on another relatively warm and dry day with conditions ideal to produce good performances and times. With team scores close throughout the day, every single point was important in every position with more than half of the competitions coming down to the very last relay event where everything changed.

Six schools from the Dyfed district won/came second in their respective age groups in the District's final last month at Haverfordwest High School (Wednesday 19th June) and travelled to Brecon looking to compete with the best in the country in a competition with International athletes out on show. All schools excelled and produced great team efforts, with numerous event wins and top placing finishes in one of Welsh Schools' biggest competitions in the summer term.

A performance to note in particular is from Morgan Batten (Dyffryn Taf) who threw a new championship best performance of 48.02m in the U16 boys javelin competition. Da iawn! Round-Up listed below:

Congratulations to all the cup & plate champions in their respective age groups as well as everyone who took part in Mid Wales as a whole. You all made for a great day's competition!

Many thanks to everyone involved on Wednesday - the Welsh Athletics Officials & Staff along with every School Teachers who supported the qualified judges on officiating duties. We also cannot forget all the Welsh Schools Officers who continue to support the WSAA competitions.