Over 500 of Wales' top school pupils headed to the new blue Cardiff International Sports Stadium in Leckwith on Saturday 6th July, for the first of two big Welsh Schools' championships in the space of four days.

With the Welsh Schools NASUWT Cymru Wales Cup & Plate Finals to come in Brecon this coming Wednesday (10th July) all eyes first turned to Cardiff and the 72nd edition of the WSAA Track & Field Championships. Many of last year's champions returned to defend titles while others had the challenge of moving into new age groupings.

All those taking part were selected to represent one of the eight districts - featuring Afan Nedd Tawe, Cardiff & Vale, Dyfed, Eryri, Glamorgan Valleys, North East Wales, Powys and South East Wales. The age groUPs were: Junior (Year 8 & 9); Middle (Year 10 & 11) and Senior (Year 12 & 13). Each district fielded one athlete per event, however additional athletes were involved in the middle and senior categories if they have reached the standard set.

Sunny and cloudy conditions changed hands for the majority of the day with temperatures soaring into the low 20 Celsius, and the races also heated up in the competition arena as athletes scored for their districts. Competition got underway at 11:00 and saw the sprint relays conclude the day almost eight hours later.

The first three finishers in each individual event were awarded with association medals presented throughout the day by Roy Adams, Steve Perks, Gerald Davies, Dai Gatehouse, Steve Jones and Kath Elias. Team trophies were up for grabs too in each of the age groups, which meant that every performance counted.

For many of the competitors, SIAB Schools International call ups were at stake as the annual fixture between Wales, England, Scotland and Ireland is hosted by Welsh Schools on Saturday 20th July at Swansea University Athletics Track. That will guarantee to see the weekend's Middle age group winner selected but the second places will go based on Power of 10 rankings and Saturday's performances.

The Welsh Schools team (U17) to represent their country on home turf was chosen by the panel the day after on Sunday 7th at Sport Wales. Welsh Schools have also been invited to enter a team into the Welsh Athletics Outdoor International too for Under 20 athletes at Cardiff International Sports Stadium on Wednesday evening, 24th July alongside the Welsh Athletics U20s.

Once again for the eighth successive year, the WSAA Championships made up part of the Urdd's "Gemau Cymru" festival weekend of sport. It's a bilingual signature event for hundreds of young people in the Welsh sporting calendar enhancing the performance pathway of Olympic, Commonwealth and Paralympic Sports.

It provided an opportunity for talented young athletes to compete in a high profile multi-sport event while experiencing an athlete village environment. Gemau Cymru showcased various competitive elements, held in Y Bala, Cardiff and Swansea on 29th-30th June and the 5th to 7th of July.

The sports included in 2019 at Cardiff, Y Bala and Swansea were:

It saw approximately 350 athletes from Pembrokeshire, Brianne, Llanelli and Ceredigion taking the spotlight and several hundred parents and teachers attend throughout the weekend to support the young athletes. Whilst there were plenty of club runners from Pembrokeshire, Carmarthen, Llanelli and Swansea present, it was also the opportunity for the less experienced schoolchildren to take part in a major competition.

The top finishers in each event from the four area championships that were held in May at Carmarthen, Llanelli and Haverfordwest qualified to compete and represent their area at the two-day weekend programme on the track and in the field.

At Cardiff, Dyfed schools saw sixty seven of its athletes make the journey up the M4 to Cardiff to compete for the West Wales based district (made up of the Carmarthenshire, Pembrokeshire & Ceredigion counties).

Hedydd Davies, the Dyfed Schools Secretary and Senior Team Manager thanked all the Dyfed school athletes who made the effort to compete in Cardiff.

A special thanks to the team managers and officials from the Dyfed District who assisted with administrative and officiating duties throughout the day, as well as all the large number of Welsh Athletics and Gemau Cymru volunteers who were out working hard all day and ensuring a safe environment for all the competitors!

In total the Dyfed schools District won a total tally medal of 62: 29 gold, 15 silver, 18 silver rounded off with five out of six relay teams making the podium: 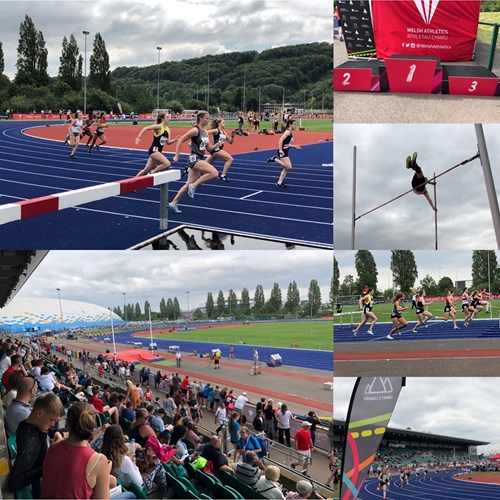