Over two consecutive days in the last 36 hours, around 400 of Wales' top junior athletes enjoyed great conditions at this year's Welsh Athletics Junior Club Championships for the right to be crowned Welsh champion. It returned for another year in the usual two-day competition format in Wrexham having made its way to North Wales for the 2017 staging almost two years ago.

Over the weekend, all eyes were on Queensway Athletics Stadium in Wrexham this year, after the 2018 championships were held on warm days at Newport Stadium.

Welsh Athletics Championships medals were at stake for the top three in each age group and event and more than 100 sets of medals were given out in front of the main stand presented by various members of Welsh Athletics.

Running on Saturday 15th June and Sunday 16th June, the event attracted athletes of all ages from a number of different clubs, led by a large contingent from the North region as well as those from the South, East and West Wales who made the trip up on Friday, Saturday and Sunday morning.

Open to athletes from all over Wales across five categories, the under 13, under 15, under 17 and under 20 age groups saw a variety of heat, timetrial and final events held, including sprints, middle distance, steeplechase, and walks alongside the throws and jumps in the centre. The races kept on coming thick and fast as the competition heated up to total around twelve hours of action for the spectators.

Most of the junior events were held over the weekend, however for under 15 athletes, some of your events will take place within the Welsh Athletics Senior Championships. These entries close on Thursday 20th June, so you don't have much time to get your name in for the Senior Championships in Cardiff!

The following events will take place within the Welsh Athletics Senior Championships on Saturday 13th and Sunday 14th July:

The Carmarthen Harriers club saw 20 members travel the 125 mile distance from Carmarthenshire up to the North East to take part against the best in the country, supported by a number of coaches and of course, their parents and friends. Over the weekend, they won a total of eleven medals all together on day 1 and day 2 - totalling 3 gold, 5 silver and 3 bronze positions. Most importantly, A haul of personal bests were recorded at these championships and a club record in addition. There's still another 2 months to go of track and field athletics to continue to improve again before the end of August arrives.

From Wrexham, one of our middle distance coaches Carol Jones commented: "Well done to all the athletes that made the journey to Wrexham this weekend; a valuable experience for all. Nearly all athletes achieved a Pb and some had a bonus of a medal.

Proud to be a part of the club and nice to hear other clubs saying how friendly the athletes were to their competitors and a club to watch for in the future. Well done to all the coaches for putting the time and effort to get the athletes to achieve their milestone."

Here we report on the day to day results below:

The opening day got off to a great start on the field with two gold medals and two new lifetime bests in the first hour of competition. Osian Roberts cleared a 4cm personal best height of 1.75m in the under 15 boys high jump after easily clearing lower heights on the way. Elsewhere on the other side of the arena, sister Beca Roberts was in under 17 women triple jump action and having jumped 10.87m in the opening round, went marginally better in her sixth and final jump to finish off with a performance of 10.88m, this also improving on her best this season.

Track events began shortly after lunchtime and second on was the under 13 boys 1500m straight final. In a great battle at the front of the field, Carmarthen took home silver and bronze thanks to the duo of Ifan Bowen and Iwan Thomas. Their finishing times were 4.53.37 and 4.59.17 respectively in the podium positions alongside Newport's Dawes. Macsen Toogood also went off in the same race consisting of nine athletes.

Staying with distance running, the 1500m time trials also saw Frances Mackie (5.17.01) finish runner-up and silver medallist in the under 13 girls and Dafydd Jones involved in a fantastic and quick under 17 men's race, finishing off in third spot next to the Reynolds brothers (4.07.78). Carys Wood (5.34.81) and Tanwen Moon (5.35.34) also represented the club in the under 13 girls and under 17 women's races respectively for top 10 placings.

Moving down to 1 lap of the track / 400m, Trystan Leech in this straight final crossed home in fifth place in the under 20 men's category, securing another good time of 52.99. Finishing off the opening day on the field was the under 13 boys Shot Put and saw James Sloyan throw a best of over 6 metres of 6.65m.

#CarmarthenSprints turned out in force once again and under the guidance of Jake Morgan and Steve Perks, have improved significantly and this was evident here. Four of the group, Jessica Lee (13:01), Thaia Davies (13.33) and Sophia Reid-Thomas (13.45) all made it through the heats and into the under 15 girls 100m final which would prove to be the race of the day going by times from the opening 3 heats. Lee improved on her way to bronze in the final with 12.80 and saw Reid-Thomas (13.24) and Davies (13.34) cross just behind in a thrilling final featuring top youngsters.

Meanwhile over in the under 17 women's age group over the same distance, Ellie Loweth went head to head against five of Wales' fastest women in the heat and clocked 12.94. She was unlucky to miss out on the final on the qualifying rule.

Middle Distance dominance continued into Day 2 today (Sunday) where weather conditions were up and down with the sun shining one minute and then a passing shower. The standout result of the day came in the under 15 boys 3000m final which was combined with the under 17 and under 20 men. After recording a 9:17:07 at the recent Watford Open Graded Meeting in London, Frank Morgan (pictured below with coach Carol Jones) went into the race looking to break a club record, held for a long time by local athletes' favourite Dewi Griffiths.

Mixing in well with athletes in the older age categories, this helped Morgan as he clocked 9.12.65 which did not only bring him a gold medal but broke the club record in the 3000m. Llongyfarchiadau Frank! In the same race, Steffan Davies also went up to the longer distance over 7 and a half laps of the track and came away from North Wales with a sixth-place finish in 10.35.80.

Staying with the longer distances, we saw a total of seven athletes race over 800m in three age groups. Returning to the track after Saturday's 1500m, Ifan Bowen and Iwan Thomas were on the start line in the under 13 boys' straight final. Bowen in 2.23.95 won his second silver medal in the space of 24 hours with a repeat of the 1500m one-two. Thomas was also featured at the front end of the leading pack and crossed in fifth in 2.30.60. Dafydd Jones in the under 17 men's race just missed out on a second medal of the weekend in fourth position but coming away with a new personal best of 2.01.17 as a pleasing consolation for his efforts.

Carmarthen Harriers were well represented in the under 13 girls' age group with no more than four taking part in the two time trials (pictured at the bottom). In heat 1, Frances Mackie and Erin Morgan finished closely securing respective times of 2.38.95 and 2.39.63. Joining them in the opening heat was Ellie-May John with a time of 2.45.64 before Carys Wood, competing for the second time in two days also enjoyed championship experience in 2.45.11. The girls were fifth, sixth, ninth and tenth overall.

300m heats and finals opened the programme on the track on Sunday lunchtime and Ellie Loweth was back out having moved up from the 100m the previous day. Her heat time of 43.79 was enough to see her progress through to the final later on in the day, where she improved by over a second on a busy few days and clocked 42.50 for fifth position and a lifetime best in the process.

Three athletes were participating on field events on the final day with two medals won here. Under 15 girls Long Jump was first up on the field in the sand. Zara Evans produced three legal jumps on her way to a best of 4.49m, which was performed in round one of three. There was an interesting under 17 men's javelin competition with three talented athletes going head to head. Throwing a huge 46.02m at the halfway point in round three, Morgan Batten as a result secured second place and a silver medal, as well as an impressive personal best with this throw backed up by 45.48 and 44.46 in rounds four and five. To complete not only the day but also the 2019 championships, Osian Roberts in his new Triple Jump event went over 10 metres to 10.27m on his way to runner up and complete the achievement of coming home with an under 15 gold and silver medal. 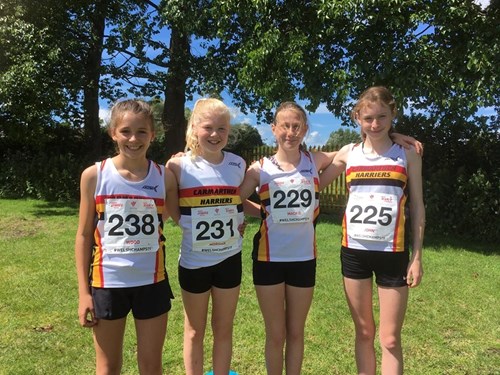 Well done to them all and the others who competed from all the Welsh clubs and across all age groups. Also, we can't forget to say a big thanks to all the officials, organisers and volunteers who supported the championships on both days in front of and behind the scenes at Wrexham.

CLICK HERE for all the full results which was updated live throughout the weekend's meeting as it happened via the new online results system.