Cardiff, Carmarthen, Neath and Swansea have all hosted junior, senior and international matches over the week just gone with some superb performances on both the track and the field. Catch up with what's been going on below...

Four Days after U17 athletes were in the spotlight at the SIAB Schools International in Swansea, Wednesday 24th July saw the Welsh Athletics U20 International return to the Welsh Capital and the Cardiff International Sports Stadium.

The Welsh Athletics U20 International featured a match between Wales, Welsh Schools, the three English regions, Scotland, Northern Ireland, and Guernsey. What a night it was...as meeting records and British records were broken in style! As at the Welsh Senior Championships just ten days earlier, Paralympic Star Aled Davies was on DJing duties and the big screen was again in use, whilst there was plenty for the commentary team of Ian Griffiths, James Thie and Chris Moss to report on right across the arena.

At the end of the six hour timetable and ending under the Leckwith lights shortly after 10pm, it was England South who were announced as the match winners, defending their title won in 2018. There were some encouraging performances from Wales' youngsters and experienced athletes, especially from the thrilling finishes to the boys and girls' 4 x 100m to take gold in both. All all of those in red running on home turf were either representing the Welsh Athletics or Welsh Schools teams.

The event was streamed Online by Vinco Sport Live, which meant that those unable to be at the stadium could watch all of the races and field events on their own computer, phone or tablet. You can catch up with on demand videos of what happened, Click Here to visit the runjumpthrow.com website.

Back down in West Wales 24 hours after the International, around twenty throwers from the region participated in the final Carmarthen Open Throws Meeting of the 2019 summer season at Carmarthen Leisure Centre on Thursday 25th July.

Despite many away with the start of the summer holiday now in full swing, there was still a good field and some exciting competition as athletes looked to improve on their previous personal best as the season slowly draws nearer to its conclusion next month.

The likes of Bethany Moule, James Tomlinson, Brett Morse and Aled Davies as well as a few Paralympic athletes are just some of the big names who have been regular attendees at the throws meetings and continue to be great models for the future generation. They have gone on to represent Wales and Great Britain in top international championships. 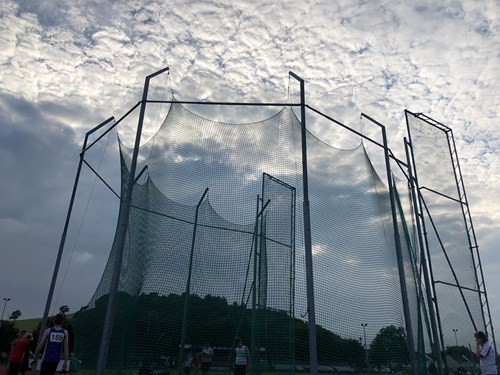 These throws fixtures have now become a popular fixture on the Welsh Athletics calendar and has been going strong for the last 9 years with familiar faces coming back each month. Arranged by Carmarthen & District Harriers Athletics Club, the series in West Wales have been held on the last Thursday of each month in April, May, June and July. The under 13 plus competition organised by Harriers club javelin coach, Ralph Siggery has given junior and senior athletes from clubs across South Wales and further afield the opportunity to take part in a laid back open event.

These events couldn't have gone ahead without the support from the qualified Welsh Athletics officials and parent volunteers from all over South Wales who ensured that events were run properly and eligible for season rankings. The club would like to thank all those who helped out at all four matches this year.

After visiting Haverfordwest, Carmarthen & Swansea in May and June, the fourth and final league match of the U11 U13 U15 Louise Arthur League arrived at the Cwrt Herbert Sports Centre Track in Neath and hosted by the local club, Neath Harriers on Saturday 27th July.

Despite the summer holidays in its first week, there was a great turnout in Neath with families, club mates and spectators lining the side of the home straight and several club tents positioned overlooking the track.

Around 380 under 11 to under 15 athletes were pre registered from the welsh based club on Saturday.

Carmarthen Harriers youngsters enjoyed more success in the warm Saturday sunshine. Numbers might have been down this time round than previous matches mainly due to holidays, however this did not dampen own and team spirits as almost fifty Harriers members competed in the vest of the club on all four corners of the venue.

There were a number of excellent individual, high placed finish and team performances with a small number either joining the team and making their debuts or trying out a new track or field event.

A big thanks once again to team managers Kathryn Jones, Keighley John and Cressy Morgan for their hard work behind the scenes in getting all the athletes out for this latest round with the best possible teams next to select for Swansea on August 25th. 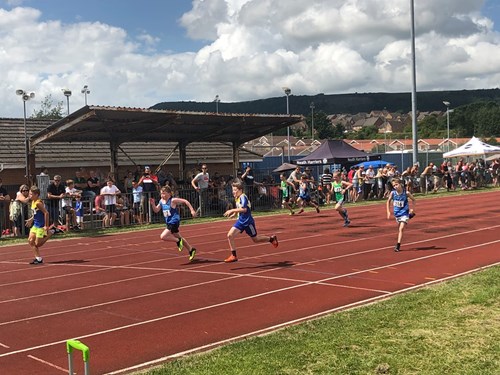 Twenty four of them got involved in the end of competition 4 x 100m relays with the club fielding a squad of four in each of the six categories.

The team were supported brilliantly by encouraging parents, supporters and coaches, many of whom helped out with the long jump and marksman officiating duties throughout the day

Carmarthen Harriers have now qualified for the Welsh Athletics Junior League Cup Final at Swansea University on Sunday 25th August and this means that all those available need to confirm their availability as it will be only two per events instead of the four over the season so far. More details will follow very shortly on the cup final. 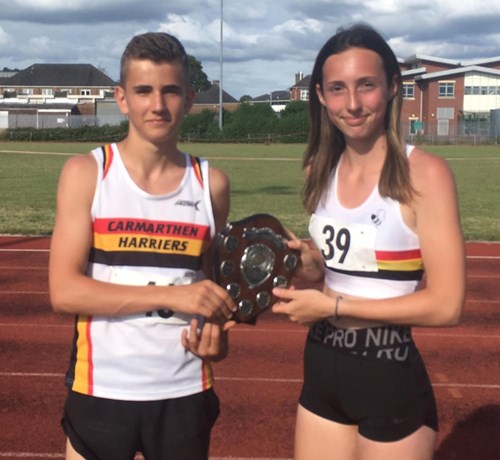 All the other clubs including joint composite teams will get involved in the August end-of-season too participating in the Plate final which will be held the day before the cup final (Saturday 24th August).

Part two of the busy weekend double-header locally went to Swansea...and saw the Youth Development League Midland Upper Age Group Promotion final head to a bright Swansea University on Sunday 28th July whilst the Midland Regional final went over the bridge to Yate near Bristol, where the likes of Cardiff and Swansea were participating.

Five teams from Cardiff Archers, Cheltenham & County Harriers, East Wales, North Somerset and West Wales finished the league campaign with spots at the Promotion final at the University Sports Campus a few minutes away from the Mumbles.

Made up of athletes from Pembrokeshire Harriers, Carmarthen Harriers, Neath Harriers and Llanelli AC, those who wore the red and black vests of the composite team ran, jumped and threw by scoring valuable points for the team across the majority of events.

Enjoying home advantage, the West Wales region retained their place in the premier Midland South West Division in 2020 with a fine win on the day in front of a vocal and supportive local following. They will be joined by second and third-placed teams Cardiff Archers and Cheltenham & County Harriers as well as the top three from this year's division - Team Avon, Cardiff Athletics and Swansea Harriers.

Thanks go to all the West Wales Team Managers, Athletes, Coaches and the army of track and field Officials who have been a part of the 2019 league campaign since the beginning of May. 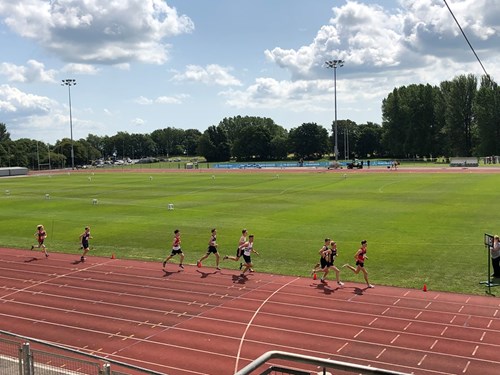 Following a pretty low turnout in general across the first three matches at Swansea, Exeter and Cardiff, it was great to see around a dozen members from Carmarthen Harriers help West Wales to stay in the top division next year which will only benefit the athletes themselves.

Swansea Results on Sunday from a Harriers point of view:

Special mention must be made to the following athletes who travelled with the team in the first three league fixtures earlier on this summer in May and June: 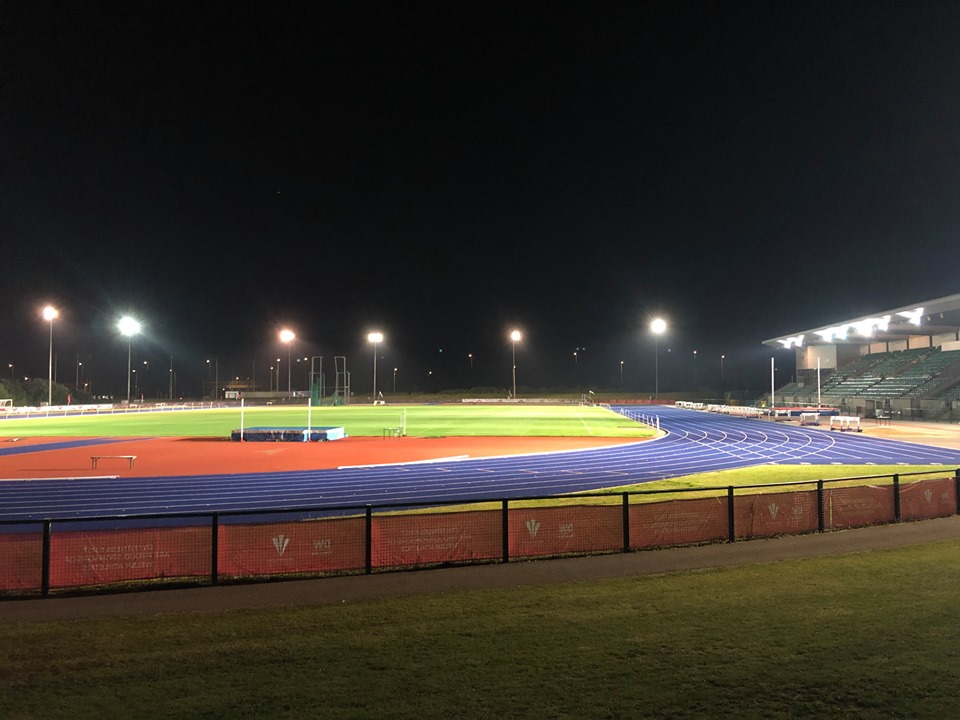