The cross country season in West Wales got off to an excellent start on Thursday with another fantastic turn out in Carmarthen at the 2019 Carmarthenshire Primary Schools Cross Country Championships, now in its 32nd edition.

Following the Welsh Athletics Road Relays Championships at Pembrey Country Park last Sunday, attention next turned four days later down the A484 to Carmarthen and the United Counties Showground in Nantyci on Thursday 19th September. This was the second big event in Carmarthenshire in the space of a week for members and runners of Carmarthen Harriers and Llanelli AC in a short period of time.

The 32nd Carmarthenshire Schools Cross Country Championships was once again organised by Dr Hedydd Davies and sponsored by McDonalds and Welsh Athletics. The club's partnership with McDonalds has grown year and year, and resulted in the club being awarded the Welsh Athletics partnership award for this reason three years ago. 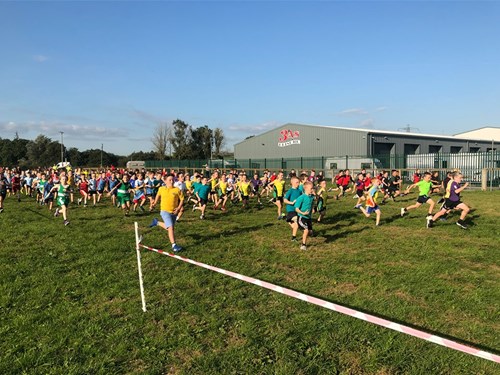 Ron Mounsey, Owner of McDonalds has been a great supporter of school athletics and cross country in Dyfed for a number of years and said: "We at McDonalds were very pleased and proud to once again be sponsoring the Carmarthenshire Primary Schools Cross Country Championships.

"It is a privilege to see so many young children in the county of Carmarthenshire taking part in sport and having a great time."

A total of over 1,061 runners (see below for individual race numbers) from more than 40 Carmarthenshire primary schools descended on the outskirts of Carmarthen to compete in the annual cross-country championships. The car park was full, hot and cold food quickly sold and plenty of local talent out on show.

It gave youngsters in four school year groups the opportunity to get involved in running and enjoy the race experience alongside their school friends, whether they were experienced club runners or trying out cross country for the very first time - that's what the event was all about, everyone having the chance to take part and having fun regardless of finishing position!

It was the first time that the championships was held in two years following the unfortunate postponement last September due to the adverse weather conditions. This time round, the sun was shining brightly with a clear blue sky and temperatures were up in the high teens. What a difference a year makes!

At the beginning of a new campaign, it followed on from the exciting Dyfed Primary Schools Cross Country and Athletics Championships held at the beginning of April and middle of May 2019 as children from Carmarthenshire, Ceredigion and Pembrokeshire descended on the Showground fields and the Leisure Centre athletics track last time.

Watching on was local Llanfynydd athlete, Dewi Griffiths who began his running career as events such as this in Carmarthenshire. Dewi by now is a Wales and Great Britain International and continues to inspire the next generation here in West Wales.

He said: "It was a pleasure to see so many young children having fun and being active. Everyone should be proud of their effort tonight. Congratulations to everyone regardless where you finished."

A total of eight races was on offer for the spectators during the evening's programme, with the year 3 and year 4's completing 2 large laps whilst the year 5 and year 6's had an extra small lap at the beginning. The finish was situated right in front of the main grandstand, where it provided an ideal opportunity for the hundreds of supporters to cheer and encourage the youngsters on.

The youngsters taking part were supported excellently by year 7, year 8 and year 9 endurance runners at Carmarthen Harriers who helped out as hares and back markers to ensure that everyone got to the finish line. A great job was done by the team of ten: Jack Thomas, Amy Greatrick, Erin Morgan, Ifan Bowen, Jake Lynock, Macsen Toogood, Frances Mackie, Steffan Davies, Rogan Cox and Alex Coles who took the lead in all eight races and were more than happy to help. 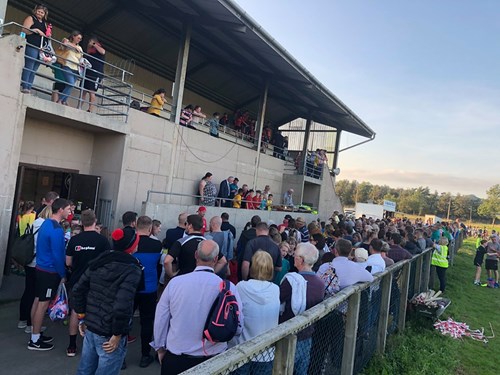 More than 100 individual and team medals were presented to the first ten in each race and the first three teams. On completion of the competition, awards were made by special guests invited to attend which were Ron Mounsey (sponsors at McDonalds), Graham Finlayson (Vice President of Welsh Athletics), Miriam Moules (Carmarthen Town Sheriff) and Dewi Griffiths (Wales and Great Britain International athlete)

As in previous years, there were team awards up for grabs with three finishers to score from each school. In the team competition, there were four different school winners:

Pupils from Ysgol Y Dderwen were again on top form in the cross country and continued their outstanding success in the team categories, winning three out of the eight available. As a result, the Carmarthen school were announced as the overall Carmarthenshire school shield winners, defending their joint title won in 2017 with Ysgol Griffith Jones. The shield was presented to the youngsters by Finlayson. Congratulations / Llongyfarchiadau!

With such big numbers in all of the races again this year, the top 12 individuals were recorded at the finish line as well as the top 10 school teams. All children were given their finishing ticket on the line and can compare them to the number of finishers listed below. 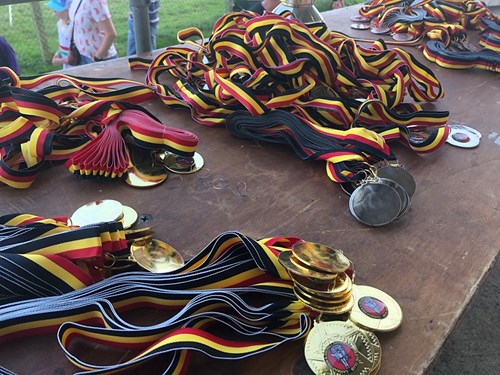 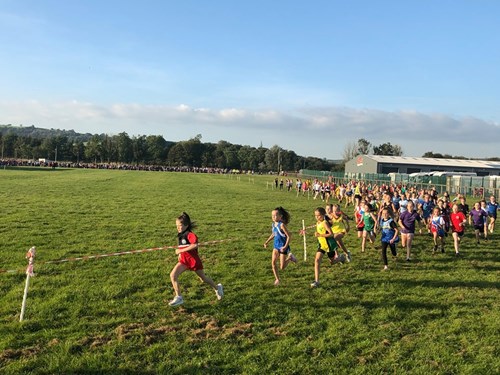 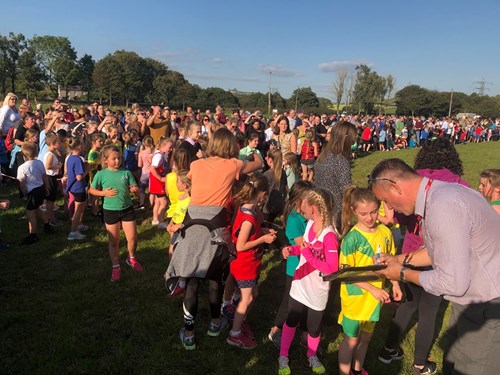 Missed any of this year's event? Pick up your local newspaper or visit our social media pages and online websites!

(A photo album of 140 images can be found on the Facebook Page, head over to have a look!)

Press reports will be provided in all your local newspapers across Carmarthenshire over the next 10 to 14 days (likely 25th September - 27th September) Where you'll find a write up on the cross country later this week and in due course:

Many thanks to everyone who contributed and ensured that the championships were a successful one in front of and behind the scenes, including all the following: 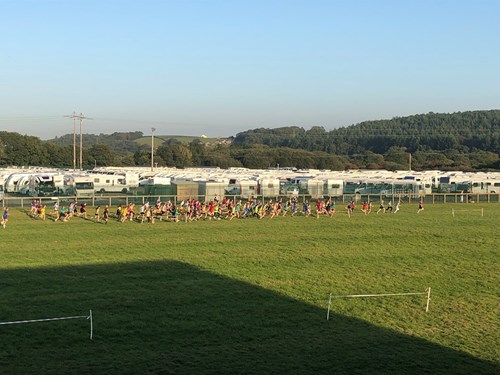