The opening two of four fixtures in this Brianne Secondary Schools Cross Country League headed down the A40 to Ysgol Dyffryn Taf in Whitland (Tuesday 24th September) and arrived at Ysgol Gyfun Gymraeg Bro Myrddin in Carmarthen this week (Tuesday 22nd October). It's become a popular grassroots event for secondary schools in the Carmarthenshire area having been organised for several years. The league races are open to those in years 7, 8, 9 and 10.

These were the first opportunity for those stepping up to secondary level in year 7 to take part in the league and compete with and against their friends from the various schools. 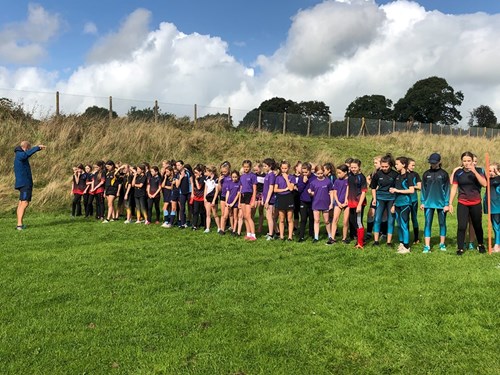 Pembrokeshire is the other county in Dyfed to put on these league races at this time of year. After a wet start to the month of October resulting in the cancellation of the event at Haverfordwest Racecourse, there was some better news a fortnight later on Tuesday 15th October as pupils and teachers made their way to the Milford Haven School to take part. Results are not available at the time of writing. Llanelli and Ceredigion schools host their championships in January along with Brianne and Pembrokeshire, before all four join up at the Dyfed championships at Oakwood at the end of Janauary (TBC).

The normal course maps applied to those taking part as in previous years at both schools. The Year 7 Girls were the first to set off doing either a lap or 1.5 laps and this was followed by the Year 7 Boys; Year 8 Girls; Year 8 Boys; combined Year 9 & 10 Girls and the combined Year 9 & 10 Boys to finish. Both races took place around the perimeter of the schools' sports field, with Bro Myrddin adding an extra loop to the top field of the venue.

More than 250 pupils attended the 2019/20 series opener in Dyffryn Taf and this was followed by a total of 223 finishers at Carmarthen on Tuesday lunchtime.

Here's the top five finishers by Age Groups from Dyffryn Taf (Round 1): 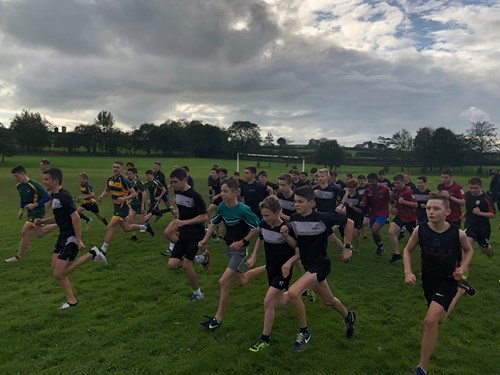 Here's the top five finishers by Age Groups from Bro Myrddin (Round 2):

Once again this year, All the Brianne Schools Cross Country matches will covered here on www.carmarthenharriers.co.uk, plus reports and results will also be found in the Carmarthen Journal and Llanelli Star newspapers and on the Carmarthenshire Herald, Llanelli Herald, West Wales Chronicle and Wales News Online websites in due course.

Looking ahead to the third fixture, that will be held at the new Ysgol Bro Dinefwr school sports facility in Llandeilo on Tuesday 19th November, starting at 1:00pm.

Meanwhile, the winter season for pupils in the Swansea, Neath Port Talbot area has also got underway in October with the District thankful to sponsors Apollo Teaching Services for their continued support. 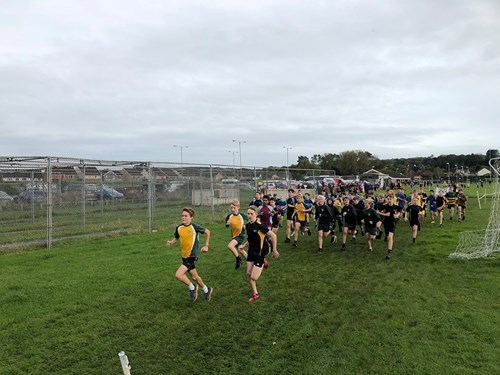 Having been called off three times due to the poor weather at the end of September, the Apollo Teaching Services Afan Nedd Tawe Secondary Schools & Colleges Cross Country Development Races finally got the go ahead at the fourth time of asking.

Due to be held at Pontarddulais Comprehensive School, the third instalment of the event moved venue and headed to the Elba Sports Complex in Gowerton, Swansea on Monday 14th October and used the large sporting field at the venue next to the primary school.

With around a dozen school present, the fixture was all about giving pupils the opportunity to take part and try cross country at the start of the season, in particular for those not involved in a club. Athletes ran around the perimeter of the field with a small lap added for the year 8 and 9 down the middle. Age Groups went from Year 7 right up to the sixth form students and distances varying from 2 to 3 big laps.

The cross country relays which has gone from strength to strength returned to the facility next to the home of Neath Harriers after very successful fixtures in 2016, 2017 and 2018. The sunny conditions and a bright afternoon helped attract approximately 65 teams between all the schools to this annual event. It saw pupils in year 7, years 8 & 9 and years 10-14 run as a trio in a team over a route of 1000m around the perimeter of the field before making their way down a small lop in the middle before handing over to their teammate who were waiting for them at the changeover box.

Indeed, it was a different challenge as this was more of a team event rather than an individual one. Complete teams throughout all three races got their own team total time. 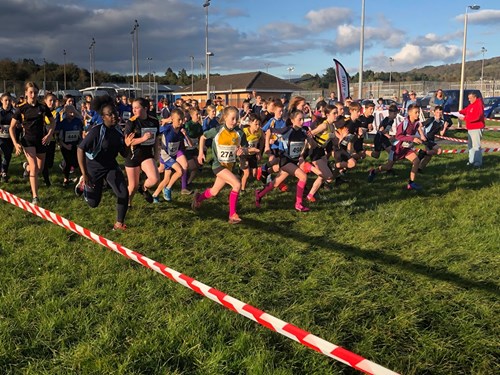 Next stop for the Afan Nedd Tawe District is the Indoor Sportshall championships which takes place at Swansea University Indoor Athletics Track, Sketty Lane on Wednesday 18th December 2019. Entries will soon open for the final meeting of the year for years 7, 8, 9 and 10 which acts as under 13 and under 15 in age groups.