Carmarthenshire County Council have decided to name the Main Stand at the Carmarthen Leisure Centre Athletics Track in Johnstown in honour of Club President Dr Hedydd Davies. This is an acknowledgement of his tireless commitment to the sport of athletics and a sign of appreciation for everything that Hedydd has achieved in athletics locally, regionally and nationally for over 50 years.

To mark the occasion, a special Unveiling Ceremony was held at in front of the stand on a stunning sunny early evening at the track in Johnstown on Tuesday Evening 2nd July ahead of the weekly training session. This was done in front of a big number of athletes, members, parents, club officers and VIP guests from the County Council as well as the Chair of Welsh Athletics, Steve Perks.

The ceremony was opened by the Head of Leisure at Carmarthenshire County Council, Ian Jones who welcomed people of all ages to the Carmarthen Leisure Centre facility. Following him and next to speak to the crowd was Peter Hughes Griffiths, the Council's Executive Board Member for Culture, Sport and Tourism. He mentioned the massive contribution achieved by Hedydd in the sport of athletics not only in Carmarthenshire but also further afield.

There was also the opportunity for Hedydd himself to speak and pass on his thanks. There was time to listen to some of his best career highlights and successes over numerous years.

All athletes present got together in front of the stand for a group photo, as which point the ribbon was cut to officially announce the new name to the covered stand overlooking the athletics track. Going across the top of the stand now reads "Eisteddle Dr Hedydd Davies Stand" and stands out nicely outside the Leisure Centre facility for everyone to see.

"It is a great pleasure for Carmarthenshire County Council and with the support of Carmarthen Harriers Athletics Club to name the stand on the Carmarthen Athletics Track in honour of Dr Hedydd Davies. This is recognition for his lifetime of service for athletics locally and nationally.

"Not only did he give himself an honour as a talented athlete but his tireless contribution as an organizer and coach has greatly influenced individuals in this sport. The number who have represented Wales at all levels under his care is a wonder and the work he and his wife, Eiddwen have done to organize events is to be praised over the years.

"As an appreciation it is a pleasure to name the stand as the "Dr Hedydd Davies Stand."

Many thanks to the staff at Carmarthenshire County Council and Actif Sport and Leisure for their support and assistance with the smooth running of the ceremony.

Some Achievements to Date, Facts & Figures

Organised 20 events a year in all area of athletics (indoor, cross country and outdoor athletics) in the last 30 years from primary level up to International level.

Organised the Carmarthen Mayor's Road race for 25 years and raised £126,000 for the purchase of equipment at the local Carmarthen Hospitals.

Team coordinator and team manager of the highly successful Carmarthen Harriers and Dyfed Primary and Secondary Schools teams in the last 25 years.

Great achievement in the last 30 years is the organisation of Carmarthenshire and Dyfed Schools Championships for primary and secondary school children in indoor sportshall athletics, cross country and athletics. About 4,000 children take part in these events every year.

Success as a competing athlete

Member of Carmarthen Harriers since 1953

Chairman of Dyfed AAA and West Wales RAC since 1981

Secretary of Carmarthenshire and Dyfed Schools Athletics Association since 1996

2007 MBE for Services to Carmarthen Harriers and Welsh Athletics 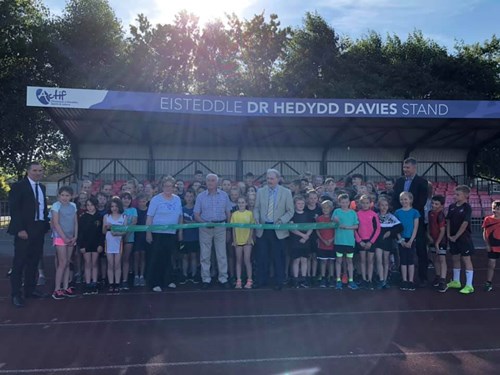