The second weekend of January 2020 saw nearly 300 West Wales athletes of all ages compete at the Regional Indoor Championships over two-days competition at Swansea University. Elsewhere, a group of endurance athletes made the long trip from West Wales up to Stirling in Scotland for the first time on Saturday for the next British Athletics Cross Challenge Series leg including the Home Countries International and Celtic Games International, representing club and country...

Following a busy start to the New Year, it was the turn of the West Wales and North Wales athletes to shine over the weekend (January 11-12) following last week's South and East Wales Regional Championships in Cardiff.

Using the fantastic facilities at Swansea University Sports Campus and the North Wales Indoor Athletic Centre within Coleg Cambria in Deeside, it was a great opportunity for experienced and new athletes to try out Indoor competition at two annual friendly fixtures. 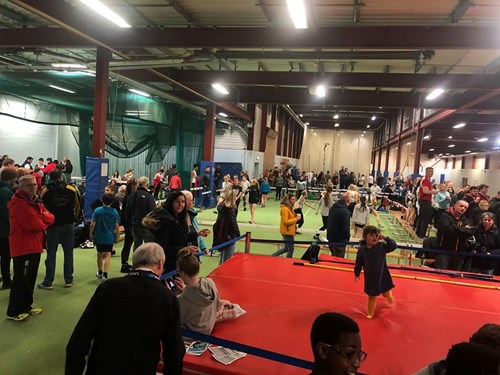 The championship was open to all age groups from the young under 11's perhaps making their debuts in an indoor competition to the experienced and elite under 17/20 and seniors, looking to impress ahead of upcoming major races which are on the way before the winter months comes to an end.

Because of the growth and popular turnout in competitors over the past few years, the championships had again been split into a two-day weekend to fit in all the disciplines on offer. The majority of the field events (jumps) were held on Saturday which included the Long Jump, Triple Jump, High Jump and Pole Vault. For all those Shot putters, their chance to compete came 24 hours later alongside the track events on day 2.

Sunday in particular attracted a large number of spectators to the venue to enjoy the sprint and hurdles races, with plenty of noise created on the side-lines. The 60m Hurdles heats and finals were the first to go at lunchtime, and this was followed for the remainder of the afternoon by a series of 60m sprint races.

What an afternoon of racing it turned out to be! The photo finish equipment came in very useful for a number of the heats/finals, thanks to a few close finishes and exciting battles as the smallest of margins decided the medallists!

For the second season in succession, the Welsh Athletics Junior Indoor Open Meeting incorporated the West Wales championships in the 200m to 1500m events in December and the recent, last weekend at the National Indoor Athletics Centre at Cyncoed.

Back in Swansea, all the other remaining disciplines were contested and medals up for grabs. For the sixty-seven participants who competed in the Open element just a week earlier in Cardiff (60m, 60m Hurdles, Long Jump, Pole Vault, Shot), this was great preparation ahead of Swansea seven days later.

Gold, Silver and Bronze regional medals were presented to the top three in each event across all age groups.

The West Wales Indoor Athletics Championships could not have run without the help of the volunteers in front of and behind the scenes including the Meeting organiser Andrew Jenkins, also all the track judges, timekeepers, starters, marksmen, field judges, photo finish, track staff, first aid, registration, cafe and the mums/dads on assisting duties. 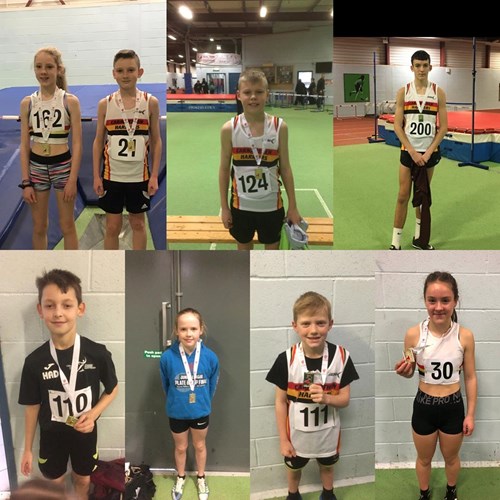 There was a good representation of Carmarthen Harriers athletes in Swansea with some brilliant results at these championships. The seventeen who entered and competed brought home a total of 24 medals between them (nine on the Saturday and fifteen on the Sunday). 13 of them were gold, 6 were silver and 5 were bronze medals. There were medals won in every single discipline in Swansea over the weekend.

The effort by athletes and support from coaches and parents on the day and the weeks before were rewarded with a haul of new personal bests for their events, with the majority achieving this at the 2020 championship opener and starting the new year on a high. Special mention to two under 13 athletes who came away with boys and girls gold in the technical pole vault discipline for the very first time.

Well Done to all those who competed at the Swansea University Indoor Athletics Track over the weekend, and we now look forward to the West Wales Outdoor Track and Field Athletics Championships (venue TBC) on Sunday 10th May. There's plenty of other indoor and cross country fixture still to come between now and the beginning of the track and field season.

Seven Endurance athletes from Carmarthenshire and one from Pembrokeshire made the long journey from West Wales all the way up to Kings Park in Stirling, Scotland on Saturday 11th January for the fourth and penultimate leg of the 2019 / 2020 British Athletics Cross Challenge Series #muddybrilliant featuring the best cross country athletes from across the whole of the United Kingdom.

The event returned to Scotland for the first time in sixteen years where athletes, officials, coaches and spectators were greeted to typical winter cross country weather! 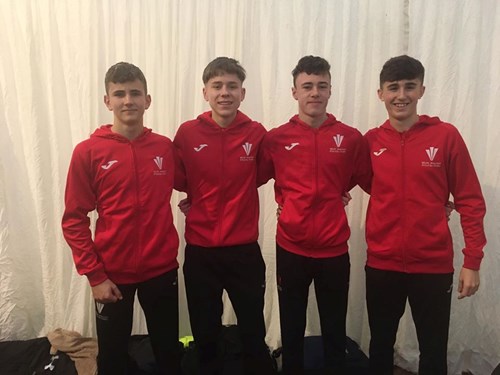 There were thirty athletes, all having impressed over the country in the past year at events closer to home, who ran in the red vest of Wales  across the under 17, under 20, under 23 and senior categories.

On a very wet and a very windy day up North making underfoot conditions extremely difficult and waterlogged, the event was streamed live online in full thanks to Vinco Sport and joined half way through the day by BBC Sport Scotland. You can watch the highlights back from all the races here.

The primary races began bright and early at 10am in the morning with events following on for Under 13, Under 15, Under 17, Under 20, Under 23 and Seniors up until later in mid-afternoon.

Three members were selected to run for the Wales and Welsh Schools squads at Stirling in 2020 at the Home Countries International / Celtic Games International.

There were excellent performances by the Bro Myrddin duo Dafydd Jones and Frank Morgan, who moved up an age group, for the under 17 men. Keeping in touch with the leading pack and working together for the majority of the 6km distance, they finished in 10th and 17th respectively but in the Celtic International element, Jones was 2nd with Morgan completing the top five to help Wales rank second in this age group.

Dafydd and Frank were joined in the under 17 men's Welsh team by Pembrokeshire Harriers' Rhys Llewellyn, clocking 22:49 for 61st.

The under 20 women's race saw Eva Edwards get another country vest, and on the day led her Welsh Schools team of four into the finish in 26th in just over 31 minutes (31:10).

The day got off to the perfect start in race 2, where William Coles was the winner of the primary schools boys' under 11 race, following up his victory at the Cardiff Cross Challenge and third at the Liverpool Cross Challenge in November 2019. 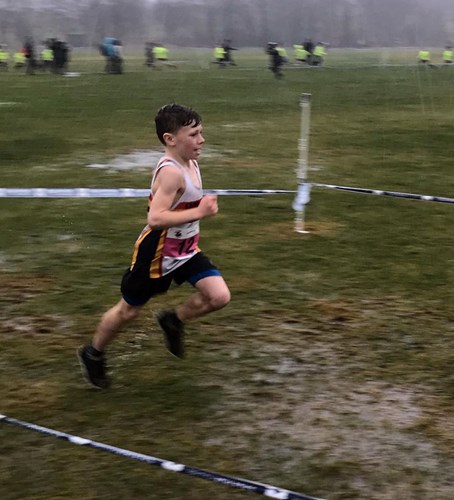 Iwan Thomas and Alex Coles, were competing at the next fixture and were representing the club in the under 13 boys' category. Thomas matched his previous position in Liverpool with another high placing of fifth (12:24), whilst Coles (13:31) also battled hard in the mud crossing in 40th.

Iwan's older brother Ben Thomas was the first of the athletes in action in the main race programme on Saturday morning. Over a 7km course through the puddles for the under 20 men, Thomas finished in 26th in a time of 25:32.

Llongyfarchiadau i bawb ar ganlyniadau gwych! Congratulations to them all on great results

Harriers endurance coach Delyth Brown was one of the Welsh Schools team managers over the weekend, joining Zane Maynard.

Fixture 5 and the final race of the Cross Challenge Series will return to Prestwold Hall in Loughborough on the first Saturday of March where all age group champions will be crowned at the end of the campaign. The UK Inter-Counties Cross Country Championships will be added in on the same course and expects to see hundreds of competitors lining up from all regions across the United Kingdom on Saturday 7th March 2020.

Cardiff and Milton Keynes already hosted races earlier in the season before the big event at Liverpool in November, which incorporated the European Cross-Country Trials to represent Great Britain at the European Championships in Lisbon.