Harriers athletes have been in action over the last three weeks across several venues as we head into December...from Wales' capital Cardiff and Glasgow to Aintree Racecourse and Sefton Park in the North West at Liverpool...

Approximately 350 juniors from the under 13, under 15 and under 17 age groups entered and descended on the fantastic National Indoor Athletics Centre at Cardiff Met, Cyncoed Campus on Sunday 1st December. The first of two days of action at the Welsh Athletics Junior Indoor Open event was held this side of Christmas.

Forty clubs were represented in total - eighteen were from all corners of Wales Wales and twenty-two from the English clubs in the South West.

The arena was looking great with parents, coaches and supporters all turning up to encourage and enjoy the opening championship fixture of the winter ahead of the Welsh Athletics Senior and Junior Indoor Athletics Championships coming up over consecutive weekends at the end of January and the beginning of February.

This was the second event at NIAC for younger club and school athletes in the space of a month, following the staging of the Welsh Schools and Welsh Athletics Indoor Combined Events Championships on the first Sunday of November, where International spots were up for grabs on the same weekend up in Glasgow (30/11/19). 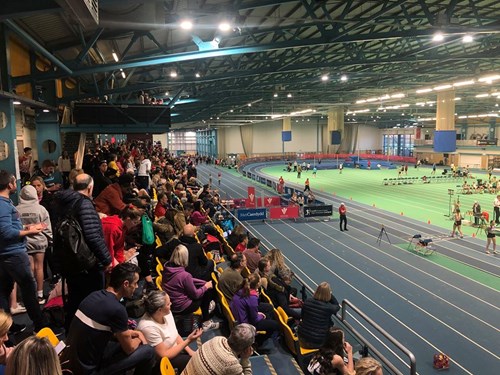 Following the same format as in 2018, the Junior Indoor Open in 2019 incorporates the South Wales, East Wales, West Wales and South West England Regional Championships and the competition has been spread out over two days due to the popular growth in all events over recent years.

200m, 300m, 400m, High Jump, Long Jump, Triple Jump and Shot Put events took centre stage on the opening day over a seven-hour programme which began at 10:30 in the morning and continued through to shortly before 5pm.

Medals were awarded to the top three in all events for South Wales, East Wales and South West England Regions.

West Wales events have been incorporated into the Welsh Athletics Junior Indoor Open Meetings for the second year in succession for track disciplines only from 200m to 1500m inclusive, for the under 13, under 15 and under 17 age groups. This is mirroring the East Wales, South Wales and South West England Regions.

On Sunday, West Wales athletes were able to enter any available open events, however, were only eligible for medals in the 200m, 300m and 400m disciplines.

Eight Carmarthen Harriers sprinters,jumpers and throwers got their entries in on time and made the hour-long trip East up the M4 motorway with regional medals on the line.

There were representatives in the 200m, 300m, Long Jump and Shot Put events across the day with a total of seven medals returning home (4 gold & 3 silver) thanks to Gregson, Lee, Reid-Thomas, Evans, Donnison and a Loweth sprint double. 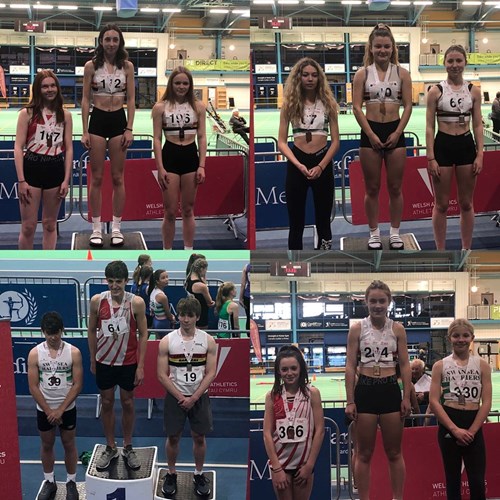 Here's how each one got on...Da iawn pawb!

Day 2 of the Welsh Athletics Junior Indoor Open Meeting (U13 - U17) will take place at the same venue (NIAC) very soon after the New Year has passed on Sunday 5th January. Events that day will feature the short and fast 60m and 60m Hurdles, 800m and 1500m distance events as well as the Long Jump, Shot Put and Pole Vault in the field.

CLICK HERE TO ENTER the Welsh Athletics Junior Indoor Open Meeting (U13 - U17) on Sunday 5th January, it closes at 12 midday on Thursday 12th December with no late entries accepted, don't miss it! Big numbers will be expected for the first junior event of the 2020 calendar year.

It's the 800m and 1500m events that West Wales club registered members will be eligible for West Wales medals that day.

60m, 60m Hurdles, Shot Put, High Jump, Long Jump, Triple Jump and Pole Vault will be held in Swansea, at the annual West Wales Indoor Athletics Championships, over the weekend of 11th and 12th of January for all age categories as normal in the West Wales Championships.

CLICK HERE TO ENTER, it closes at 12 midday on Wednesday 1st January 2020 with no late entries accepted, don't miss it!

ELSEWHERE, HERE'S SOME OF THE OTHER RESULTS FROM RECENT FIXTURES OUTSIDE OF WALES...

Endurance athletes from Carmarthenshire travelled to the North West of England on Saturday 23rd November for the third leg of the 2019 / 2020 British Athletics Cross Challenge Series featuring the best athletes from across the United Kingdom.

There was an excellent third place overall for under 11 athlete William Coles in 7:07 and as a result stood on the podium winning bronze.

Coles was the first across the line when the series opener headed to the Welsh Capital in October and got the season off to the perfect start. 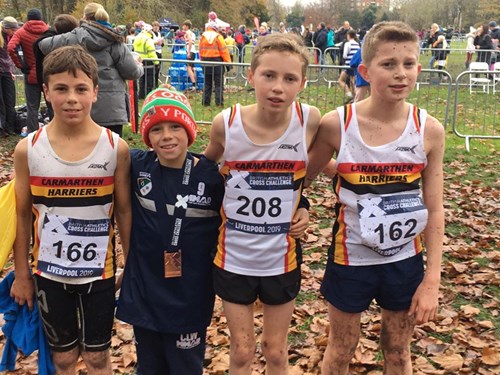 The under 13 boys' trio of Iwan Thomas, Ifan Bowen and Alex Coles tackled the 3km distance in difficult conditions in the fourth race of the programme.

One of the highlights so far this winter was the outstanding run produced by Frank Morgan at the previous match in Milton Keynes at the beginning of November.

Going head to head with the UK's best in the under 15's, Morgan pulled away from the chasing pack to claim the runners-up spot.

At Liverpool, the Ysgol Bro Myrddin pupil continued his fine form by taking another high placing of fifth (10:09) heading into the remaining two fixtures. His club teammate, Steffan Davies in the same race ran strongly, coming away with a time of 12:35 in 131st.

Huw Davies was the sole competitor that took to the start of the senior men's race featuring over 620 finishers. Running in the vest of the Johnstown club, he clocked 45:50 after completing three circuits of the Sefton Park fields.

Fixture 4 will move to Stirling in Scotland after Christmas in mid-January before the series concludes this year at the UK Inter-Counties Cross- Country Championships in Loughborough at the beginning of March 2020 where champions will be crowned.

Cardiff and Milton Keynes already hosted races before the big event at Liverpool, which incorporated the European Cross-Country Trials to represent Great Britain at the European Championships in Lisbon next week. Six athletes from Wales have since been selected as part of the 40-strong team for Portugal.

The team came together six days earlier at Swansea University Indoor Athletics Track with team managers ahead of the long trip by coach to Glasgow which began very early on Friday morning!

The International were for competitors in the under 16 and under 18 categories and the Welsh Schools squad enjoyed some encouraging performances against tough opposition. Some had already had valuable experience of the competition whilst for others, it was all about learning and the first of many opportunities for them at this level. 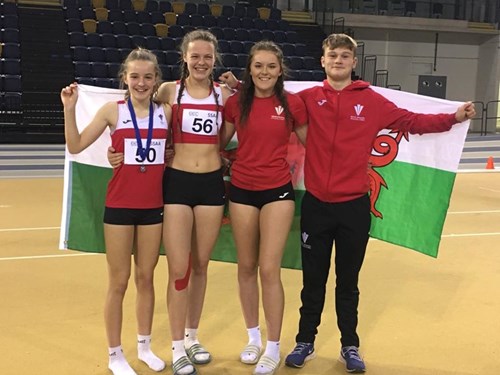 Both age groups, with four athletes per country featuring, completed a pentathlon with 60m Hurdles, Shot Put, 200m / High Jump, Long Jump and 800m to finish off making up the pentathlon. 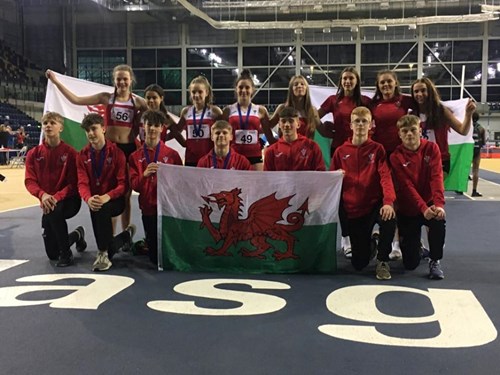 A big well done to Beca Roberts, from Ysgol Bro Pedr for being selected to compete at the International again in 2019 and placing 15th. In addition, there were some further great news as she was announced as the overall team captain for the girls, a great honour! Results:

All Results from the events listed above along with every other week available at www.carmarthenharriers.co.uk/results