It was held on the same day as the English, Scottish and Northern Ireland championships at Leeds, Falkirk and Dublin.

Having taken place over the last three years at Singleton Park in Swansea, the popular competition travelled 20 miles further West.

These championships have provided great inter-club entertainment since the first ever event started in Ely back in 1894 and has always been one of the most important events of the year in Wales, with cross country running being the winter base for all success in middle distance running on the track and the road in the summer.

The championships in 2019 made a move into Carmarthenshire to the magnificent Pembrey Country Park near Llanelli which is set inside 500 acres of woodland and alongside eight miles of golden sands near Cefn Sidan Beach. Supported by Carmarthenshire County Council, the park will also be hosting this event for the next two years over the three-year cycle.

Many of the junior athletes in particular in action on the weekend were back in competition, just 10 days after representing their districts at the Welsh Schools National Championships in Brecon.

Athletes, officials, guests and spectators were welcomed to near perfect cross-country conditions, with not a cloud in the sky and unusually mild for this time of year before grey and damp weather arrived towards the latter stages of the afternoon. A strong breeze did make it tough for runners in the early races of the day before dying down slightly.

On a demanding course that showcased the counties park and the surrounding areas, the competitors aged 9 to 80 tackled fast grass sections, sand dunes, woods and paths along with running over logs and through the "Marquee of Mayhem" situated near to the finish line.

The course had excellent spectating views for those who came out to watch on Saturday afternoon, whilst participants had the chance to take in some breath-taking sights around the route which overlooked Carmarthen Bay.

There were eleven races on the race timetable for the future primary school generation right up to the more experienced seniors and masters with individual titles and team medals up for grabs. Therefore, every individual position counted across all categories as presentations were made to the first three individuals and the first three teams based on three, four or six to score.

In one of the largest fields to date, the 2019 edition of the Welsh Athletics Cross Country Championships saw 628 athletes finish their respective races.

Local favourite Dewi Griffiths claimed a seventh Welsh Cross-Country title and is now only two away from Steve Jones' record of nine senior men's titles. Training ahead of the London Marathon in April, Welshman Griffiths had only returned home from altitude training with Jones in America on Thursday but appeared to be getting back to his best in Llanelli. Leading from the front, the Swansea Harrier never looked back as the gap increased after each of the three laps. This followed on from a great run of 61:44 at the Houston Half Marathon last month.

A delighted Griffiths in his home county said: "This is one of the titles I appreciate the most. The way last year turned out, I was disappointed to lose my streak but it's nice to get it back and now it's one step closer to Jonesy. He set the bar pretty high in these championships so hopefully one day I can emulate that.

"In the grand scheme of things, it's another test and I've come through it. This was another stepping stone towards London which is the big aim for the spring.

"Ieuan and James both ran well and I'm happy with that, it shows the kind of shape I'm in."

The runner-up spot went to Steeplechaser Ieuan Thomas and was the first of two Cardiff AAC athletes in the top three. His teammate and defending champion from Swansea, James Hunt completed the podium positions but had to settle for third this time round. Abed Teweldebrhan (Newport Harriers) and Guy Smith (Swansea Harriers) were next in.

Dan Nash, Stephen Morris, Owen Haswell and James Thie joined Thomas and Hunt in the winning senior men's team, where Cardiff AAC picked up the gold for the first time since 2013. Aberdare Valley and Swansea Harriers joined them on the podium in that order.

The Senior Women's race also proved to be a victory by a comfortable margin. Jenny Nesbitt's journey from Worcester AC was worth it as she ran to number one by almost a minute over the 7,360m distance. It's been a successful few months for Nesbitt, who won the Nos Galan Road Race on the final day of 2018 followed by a 73:16 clocking at the Barcelona Half recently.

"I really enjoyed today"said Nesbitt."It means a lot to win a Welsh title on the Cross-Country. It was where my running started so I'm very pleased with that. It bodes well going into the Inter-Counties where I'll be challenging a lot of tough runners with the aim of getting to the World Cross."

Following on behind her in second and third respectively were Melanie Wilkins (Winchester & District AC) and Jade Williams (Amman Valley Harriers).

The team title in this senior women's race was retained by the Swansea Harriers quartet of Alaw Beynon-Thomas, Sian Edwards, Helen Marshall and Rachel Davies who finished four in thirteen. The B team were bronze medallists with Cardiff AAC filling second.

A small field of 13 took to the start in the under 20 men's race, but still had plenty of quality and this was evident in the first half of the race where a group of six or seven packed in together. Eventually, Conor Smith defended his U20 title to add another to his name. Welsh Schools winner Larry Ryan was second just in front of another local athlete and Carmarthen's Ben Thomas.

Meanwhile, the under 17 and under 20 women was a combined race with both age groups scoring separately. The under 20 women's champion was Ashleigh Willis, taking a 9 second victory from Katrin Higginson, who as a result took the under 17's title. Martha Owen, Ffion Higginson, Eva Edwards and Rhiannon Kamink from the Deeside AC, Bridgend AC, Carmarthen Harriers and Colwyn Bay AC clubs were second and third in their respective categories.

Another athlete to make it a double win in the space of a week and a half was Osian Perrin, who made the worthwhile journey down from Menai Track & Field to win the under 17 men's race ahead of Samuel Roberts (City of Sheffield and Dearne AC) and Lloyd Sheppard (Cardiff AAC).

First race to set off at 11:00am on Saturday were the under 13 boys who tackled 3,150m around the looping course. Maldwyn Harriers' Callum Morgan and Aled Breeze secured a one-two for the North Wales club with Morgan claiming the age group title. Loui Camilleri from Cardiff Archers followed them in third with a talented group of youngsters closely behind.

The under 13 girls' title headed East and to Newport Harriers' Ceri Griffiths who strided away from second place Maddison Griffiths from Maldwyn Harriers and Bridgend AC's Anna-Rose Merchant in just over 12-minute clocking.

At the half way mark in between the Welsh Championship races, there was the opportunity for the future generation, primary school athletes in years 5 and 6 to get their moment in the spotlight as they completed a small lap of the main field.

Carmarthen Harriers and Pembrokeshire Harriers were dominant in the boys' section taking first and second individually and in the team rankings. Macsen Toogood continued his fine form over the country in 2018/19 to pick up the Welsh Cross-Country win and five seconds behind him, there was a sprint finish between Oberon Kearney (Wirrall AC) and Rowan Dixon with the latter getting the nod on the line despite having identical times.

There was also a grand stand finish in the primary girls with a race to the winning line between Ruby Herman and Libby Hale. Brecon's Herman managed to pull away in the final few metres for a one second victory ahead of the Swansea Harrier who led her team to the top of the podium. Maldwyn Harriers picked up another individual medal thanks to third placed Mackenzie McCourt.

Across all of the junior championship age group races, team gold medals were presented to four clubs from Cardiff Archers, Cardiff AAC, Carmarthen Harriers and Swansea Harriers. In the two primary events and going to form in the John H Collins Gwent Cross Country League this term, Carmarthen Harriers and Swansea enjoyed team wins in their home region.

As far as the country and road is concerned, the season concludes with the final rounds of the John H Collins Gwent Cross Country League & UK Inter-Counties Championships over the next fortnight, whilst school athletes look forward to representing their country at the upcoming schools International Athletic Board Cross Country Match and Virgin Money Giving London Mini Marathon over the next two months at the English and Ireland capitals.

Watch some of the best bits over 4 minutes from Saturday via THIS VIDEOwhich has been posted on our YouTube Channel. 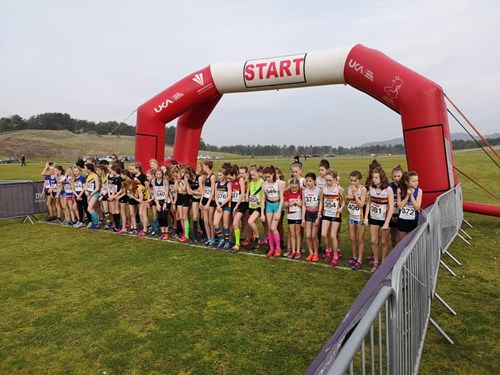 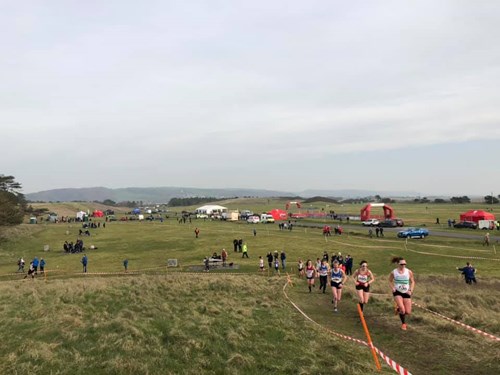 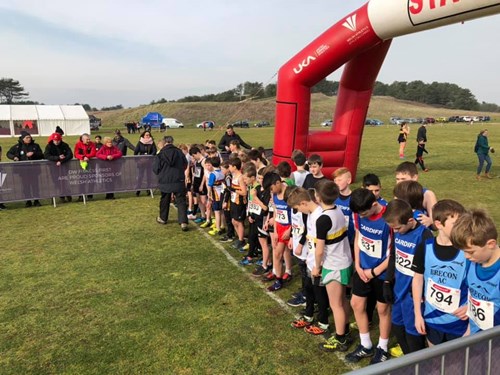 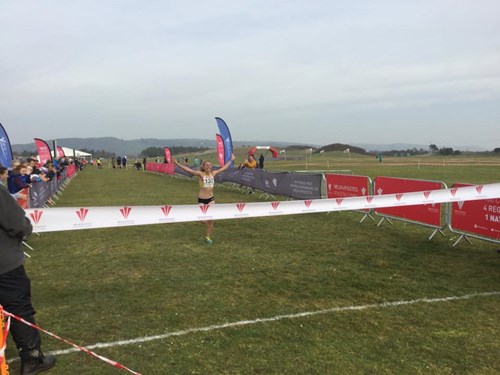 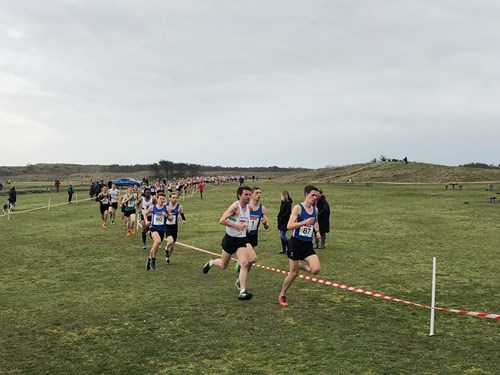 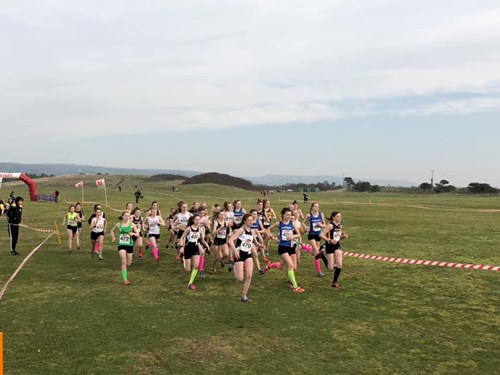 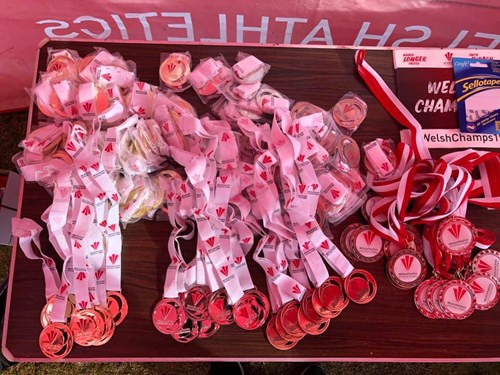 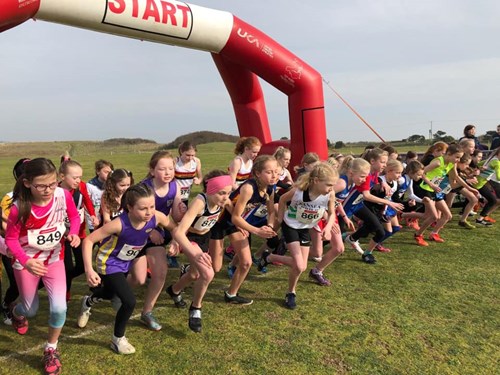