At the beginning of a New Year, the first championship event of 2020 took place at the National Indoor Athletics Centre at Cyncoed Campus, Cardiff over the weekend.

The Welsh Athletics Junior Indoor Open incorporating the South Wales, East Wales, West Wales and South West England Championships saw athletes from the under 13, under 15 and under 17 age groups looking to get their year off to a good start ahead of the remaining busy winter months.

Following on from the first successful day on the first day of December 2019, over 500 athletes were back at the indoor track on Sunday 5th January to battle for individual performances and podium positions.

A good turnout of friends, family and coaches watched on from the spectators seating area and made plenty of noise, with only standing room spaces available for the majority of the afternoon. 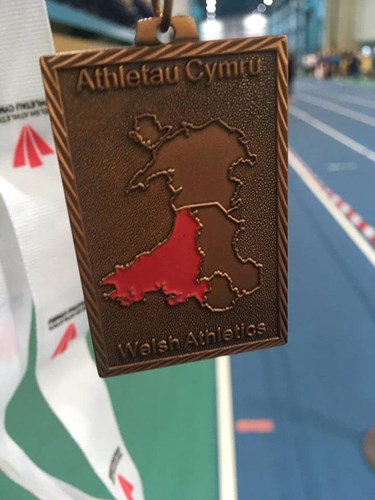 The second day's events over the seven-hour programme included a number of 60 metre sprint heats as well as the 60 metres over the hurdles in the centre of the arena. As well as the short and fast sprints, NIAC saw a series of 800m and 1500m time trial races held around the track, as cross-country runners took a break from the wet and muddy fields outdoors to compete alongside familiar faces over a 200m track.

Forty-Seven clubs were represented in total - 23 were from all corners of Wales and 24 from the English clubs in the South West.

Following the same format as in 2018, the Junior Indoor Open in 2019 incorporated the South Wales, East Wales, West Wales and South West England Regional Championships and the competition was spread out over two days due to the popular growth in all events over recent years.

As a pilot initiative this indoor season, West Wales championship events were incorporated into the Welsh Athletics Junior Open Meetings for track disciplines only from 200m to 1500m inclusive, for the under 13, under 15 and under 17 age groups. This time round, 800m and 1500m runners were eligible for medals, whilst all the other available events were run in the junior open element.

Becoming West Wales champions in the distance disciplines on the track (800m, 1500m) were the following listed:

The Welsh Athletics Senior and Junior Indoor Athletics Championships are fast approaching, being held on respective weekends at the end of January and the start of February at the same location. The Vinco Sport cameras will be in attendance streaming the championships live online on Saturday 25th January when the top Welsh seniors will go head to head on the track and in the field.

Sixteen Carmarthen Harriers sprinters, endurance runners, jumpers and throwers got their entries in on time and made the hour-long trip East up the M4 motorway to compete, some returning to the Welsh Capital for the second day in five weeks. 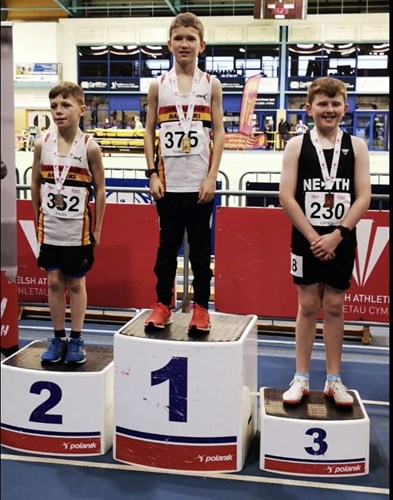 There were representatives in the 60m, 60mH, 800m, 1500m and Long Jump events across the day with a total of seven medals returning home in the 800m and 1500m eligible events (2 gold, 3 silver and 2 bronze). This followed up the 4 gold and 3 silver medals won in the 200m and 300m events in December 2019 which meant that fourteen medals were picked up combined.

It provided a great warm up for those who took part in the open element this weekend and have entered the West Wales Indoor Athletics Championships in six days' time where regional medals will be on the line!

Here's how each one got on and time...Da iawn pawb a pob lwc penwythnos nesaf!