Today/Heddiw (Saturday 25th May), almost 400 children from nine junior Welsh clubs took to the track and the runways to represent their club at the second round of competition at the Welsh Junior League / Louise Arthur League for under 11, under 13 and under 15 youngsters.

Again taking place on the second Bank Holiday weekend in May in the space of three weeks, the next West Division match on the 2019 summer calendar arrived at the home of Carmarthen & District Harriers Athletics Club following the opening round down the A40 at Haverfordwest High School with the Pembrokeshire Harriers as hosts.

With trips to Swansea and Neath coming up in the next two months, it was our turn to welcome our friends from Swansea Harriers, Pembrokeshire Harriers, Neath Harriers, Llanelli AAC, Bridgend AC, Pontyclun AC, Barry & Vale Harriers and Brecon AC to the Leisure Centre facility in Johnstown on what was a dry and relatively warm Super Saturday.

We were delighted to have our new club sponsors and the weekend's event sponsors, Bwydydd Castell Howell Foods Ltd on board and the club are grateful for their continued support and contribution.

The Louise Arthur League has gone from strength to strength with around 500 athletes competing in each event in 2018. It's given children of all ages between under 11 and under 15 age groups the opportunity to compete in a friendly league alongside other runners from across South and Mid Wales.

While for some it is their sixth and final year at the event at under 15 level, for many others particularly in the under 11's, they made their debut in the competition and a chance to show what they can do whilst trying out now disciplines at the same time.

This year's Cup and Plate Finals will take place again at Swansea University Athletics Track over the weekend of August 24th and 25th. After the four league matches upcoming, the top teams will go into the cup final whilst the plate final will be occupied by those in the fourth to seventh positions.

Starting shortly after 11am with the hurdles, 800m and hammer events and using a new timetable for the 2019 season, the track then went on to the sprints over the ever popular 75m and 100m races. Ahead of the 1000m walks and sprint relays to conclude the competition, there were more variety of sprint age group races including the 150m, 200m and 300m after the 1500 metres. Introduced for the first time this year were shorter 600m discipline for the under 11 age group and proved popular in Carmarthen with three time trials in the boys and girls categories.

More than 70 races were covered on the track with a number of close finishes too, no more so than the under 15 girls' 100m where Ella Wintle (Pembrokeshire Harriers) and Jessica Lee (Carmarthen Harriers) crossed in a blanket finish of 12.8 seconds.

The field was just as busy with club vests of all colours out on show with all corners of the venues filled with throwers and jumpers. The hammer, javelin, long jump, shot, discus and high jump were available for most age groups.

A note of congratulations goes to William Trott (Swansea Harriers) who broke the Louise Arthur League record for the under 15 boys pole vault at Carmarthen. He cleared 3.80m which was 50cm more than the previous record. Da iawn William!

In addition, a dozen athletes received recognition for their "athlete of the match awards" from the Louise Arthur League Fixture 1 / Gerald Codd Trophy Match in Haverfordwest on May 4th. The announcer of the day Mr Edward Morgan interviewed a few of them about their day's performances inside the cabin when collecting. 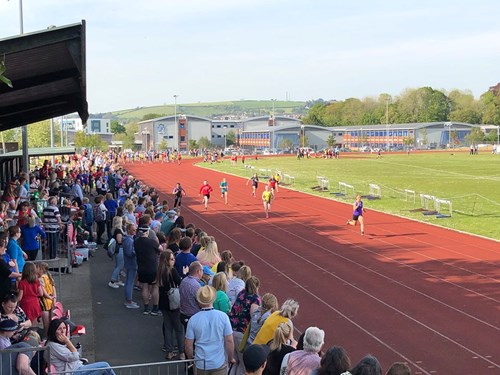 A total of sixty plus members from Carmarthen Harriers competed on their home track in what was a great team performance all round. A small number either made their debuts in the Louise Arthur competition or in a new track and field event.

The team were supported brilliantly by parents, supporters and coaches, many of whom helped out with the officiating duties throughout the day on track, time and at the hammer/discus cage.

Hosting a match required a lot of support and hard work from individuals. A big thank you to all the Carmarthen Harriers parents, officials and members who helped out on refreshments, team management and officiating duties, some staff and volunteers who were at the venue for nearly 12 hours. Also, without forgetting the Leisure Centre, Chief Officials on track, timekeeping and field, St John Ambulance, Sponsors, Gloucester Sports and all club volunteers. A Great team effort which was rewarded with an excellent hosting of this high quality match. A special mention to Alison Thomas, Jake Morgan, Cressy Morgan, Keighley John-Gallagher, Gail Evans and Kathryn Jones for their hard work before and on the day.

On we go to Swansea University, Sketty Lane on June 29th 2019

The third round of four sees the clubs head to the fantastic Swansea University Athletics Track in Sketty Lane. On Saturday 29th June 2019, we'll be doing it all again and hopefully athletes will be able to keep up their fine form and team performances.

Team Managers Kathryn Jones (boys) and Kayleigh John (girls) with assistance from Cressy Morgan will be at the track and contacting parents in the next two-three weeks to confirm your availability. They will need to know events by Tuesday 25th June!

Details are on the way on www.carmarthenharriers.co.uk in a fortnight's time.

Well done to all the athletes who took part / Da iawn i bawb wnaeth cymryd rhan. We hope all athletes, officials, spectators and parents from our visiting clubs Barry, Bridgend, Brecon, Neath, Swansea, Pontyclun, Llanelli and Pembrokeshire enjoyed their visit to the Carmarthen Leisure Centre Athletics Track facility and had a safe journey home!