All Roads lead to London on April 28th for another edition of the Virgin Money London Marathon!

A squad of thirty-five Welsh Athletics youngsters again represented Wales at this year's Virgin Money London Mini Marathon in the heart of the English Capital on Sunday 28th April, which acted as the British Athletics Road Running Championships for the 11th time.

The main 26.2 mile in its 39th edition and broadcasted on BBC Television again saw thousands of elite and novice runners take to the start line from 9:05am. There were many inspiring stories in amongst the 40,000 participants and all running for many different reasons including raising money for charities and organisations.

From 8:35am on Sunday morning saw the stars of the future take centre stage, following in the footsteps of their heroes including Mo Farah, Shelly Woods and David Weir. This important element of the day for the nine regions of England, Scotland, Northern Ireland and Wales along with all the London Boroughs, has been held in London every year since its launch in 1986.

The London Mini Marathon for 11 to 17 year old children hosted a series of age group races covering the last 3 miles of the London Marathon route and featuring well over 200 participants in each of the races. Having started at London's Old Billingsgate, they took in one of the London Marathon's most famous stretches before they ran across the iconic finish line on the Mall.

Described as one of the warmest events on record 12 months ago in 2018 reaching over 20 degrees Celsius, conditions were near perfect this year with plenty of cloud overhead and temperatures relatively cool for running.

This was the second International fixture in the space of five weeks after Welsh Schools distance runners travelled over the Irish Sea over to Dublin for the 2019 SIAB Schools Cross Country International at the end of March. The annual match featured the best athletes from Wales, England, Ireland and Scotland and many of these athletes in action on the cross country course descended on London to represent their country on the road.

Welsh Athletics took over the responsibilities of the Mini Marathon selection in 2019 from Welsh Schools who had taken teams to this prestigious event for sixteen years.

It provided an opportunity for young athletes from Wales to test themselves against the best in Great Britain & Northern Ireland, competing against the other Celtic nations, the powerful English regions and athletes from 33 of the London boroughs.

A new selection process was in place this year here in Wales as each of the four regions in Wales held time trial events during the month of January over 3000m. The winners from the South, East, West and North events at Newport, Carmarthen and Deeside were guaranteed a selection spot automatically whilst the final two spots to make up a team of six were decided on the fastest times across the under 13, under 15 and under 17 age groups.

Whilst now a familiar challenge for many of the top end club runners, for others it provided an opportunity to gain experience and learn about both the event and the road racing discipline. This came into action in particular for many of Wales' under 13 athletes who were wearing the red vest of Wales for the first time.

The full squad and their team managers travelled up on Saturday morning starting at Carmarthen and picking up in Swansea, Bridgend, Cardiff and Newport. Met by their North and Mid Wales teammates later on in the day, and following an overnight stay at the Royal Holloway College, the team continued into the English Capital early on Sunday morning ahead of the races.

In the team competition (4 to score), the best scoring Welsh team came from the under 17 boys for a successive year, who came in 4th place just as they did in 2018. Meanwhile, other positions recorded in the other races were ninth, two tenth, eleventh and a twelfth.

Whilst three had already tasted International experience before this weekend, it was the first time that Jack Thomas and Zach Elvy represented their country and won their first selection after a great winter which was recognised with these deserved call ups. In the under 13 boys' race, Zach was the third athlete in for Wales in 56th in the British Road Running Championships whilst Jack was not too far back in the middle of the field in 66th position.

Moving into the under 15 boys' category and half of the team were filled by West Wales athletes. Adam Beer, Liam Edwards and Dafydd Jones have had an outstanding cross country season and their reward to hard training was being selected for the Mini Marathon in the upper age of the group. They finished in 27th, 46th and 51st respectively, with the trio a part of the scoring team for the Welsh.

Well Done to each and every one, Carmarthen coaches Carol Jones, Neil Thomas and David Toogood must be very pleased!

All at the club passes on its congratulations to two former Harriers members Dewi Griffiths and Josh Griffithswho put in brilliant performances at the London Marathon.

Dewi took part in just his second marathon following his debut at the Frankfurt Marathon in October 2017 when he ran 2:09:49. Battling against the wind, Dewi coached by Kevin Evans finished in 16th position overall in 2:11:46 and as a result, was third British athlete home. In addition, Griffiths taking the Welsh championships on the day ran under the qualifying time for the marathon at the IAAF World Championships in Doha later this year.

Elsewhere his Swansea Harrier teammate Josh Griffiths was back in London for a successive year following that amazing result which saw him cross the line as first British and qualified for the Gold Coast Commonwealth Games last summer. On Sunday, Josh also finished high up the field in 21st with a personal best time of 2:14:25.

The Griffiths duo are regular attendees at the track down in Carmarthen and are still an important part of the club in inspiring the next generation of distance runners.

One of our current active members, Wendy Price also took on the challenge of running a marathon. Running in her V40-44 category, she did an excellent job of completing the course in 3 hours 9 minutes and 56 seconds which is possibly a medal in the Welsh championship.

Many congratulations and well done to everyone from Wales that travelled across the bridge to take part, whether it was in the mass London Marathon or the junior London Mini Marathon races on Sunday. The ballot is now open for the 2020 event and you can enter by clicking here

Virgin Money London Marathon: Find out all the finishing times and search for an athlete by name or number in the Marathon by clicking here

Virgin Money London Mini Marathon: Find out all the finishing times and age group results in the Mini Marathon by clicking here 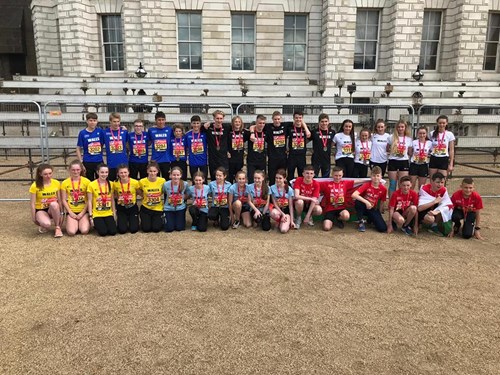