Dyfed athletes and staff from more than 25 of the district's secondary schools & colleges have been busy recently over the last fortnight at their area athletics championships held at Carmarthen, Haverfordwest and Llanelli in the space of 14 days featuring participants in Years 7, 8, 9, 10 and 11. 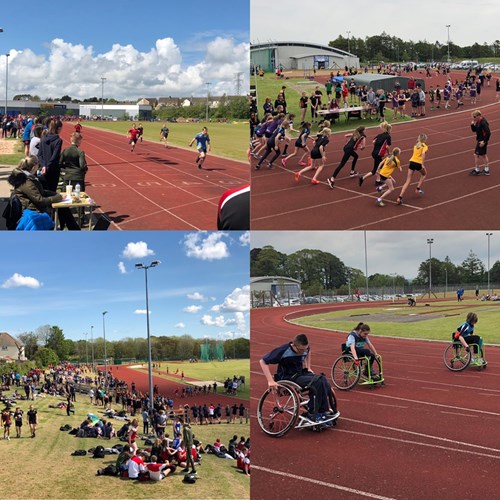 There was plenty of local talent and future school stars out on show during the four meetings with over 1200 youngsters taking part.

24 hours before the West Wales Championships at Swansea, the Pemberton Athletics Track outside Parc Y Scarlets in Llanelli hosted the first of four area matches on Friday 10th May as Ysgol Y Strade, Coedcae School, Ysgol Bryngwyn, St John Lloyd School, St Michaels School and Glan Y Môr School made the short journey across town to the home of Llanelli Athletics Club for their first visit to the venue in seven days.

Next up back down the A484 six days later saw Carmarthen Leisure Centre Athletics Track in Johnstown host the first of two at the venue, the Brianne Championships was first to take place on a warm Thursday 16th May.Ysgol Dyffryn Aman, Ysgol Maes Y Gwendraeth, Ysgol Bro Myrddin, Ysgol Bro Dinefwr, Ysgol Dyffryn Taf, Queen Elizabeth School and Llandovery College were the seven represented ahead of the NASUWT match just a few days later.

Then to round off a great two weeks on Friday 24th May, eight Ceredigion Schools travelled South yesterday for their six-hour match and had a day out using the facilities at Carmarthen Leisure Centre. Children in action this time round were from Ysgol Henry Richard, Ysgol Bro Pedr, Ysgol Penweddig, Ysgol Penglais, Ysgol Aberteifi, Ysgol Aberaeron, Ysgol Bro Teifi and Ysgol Emlyn totalling eight schools.

The same events were available in each fixture and age groups in sprinting, hurdles & middle distance as well as the popular field disciplines that were on offer at opposite ends of the competition arena. As a bonus this year, Pembrokeshire & Ceredigion saw a total of nine wheelchair users between them get a chance to be a part of the day in their own 100m race.

The standard of competition was very high with many encouraging performances shown. Everyone was very lucky with the weather conditions throughout with very little rain around despite the strong wind at times for the throwers and sprinters.

Schools will be / have been in action at the NASUWT Under 14 and Under 16 Cup competition which sees the top 2 head to the grand finale with the final to be held very soon. The district's final will be down in Haverfordwest High School and will take place on Wednesday 19th June (12:00pm) with the Welsh Schools National Final to come in Brecon in mid July for the leading teams who come out on top.

Thanks to all the teachers and club volunteers on judging and admin duties at any of the four events to make sure that the area championships were again a great success and giving the children the opportunity to get involved in grass roots sport.

The top finishers in each event have now qualified to compete and represent their area at the big Dyfed Secondary Schools Athletics Championships at Carmarthen Leisure Centre over a two-day weekend. It is being held on Friday evening 7th and Saturday 8th June and promises to be a great day of quality athletics in West Wales. Following the championships, a team will be selected for the Welsh Schools National Athletics Championships in Cardiff on Saturday 6th July.

MORE DETAILS ON THE 2019 DYFED CHAMPIONSHIPS WAS PUBLISHED ONLINE IN THE PAST WEEK - CLICK THIS LINK FOR EVERYTHING YOU NEED TO KNOW.

Out on the road with the Dyfed Secondary Schools Area Athletics Championships on www.carmarthenharriers.co.uk...

You can find much more photos, footage and updates from all four of the Llanelli, Brianne & Pembrokeshire area athletics championships on the Carmarthen Harriers Facebook, Twitter & Instagram social media pages. Three out of the four were covered between May 10th and 24th. Go to Photos on the left of the Facebook page or scroll down on the other platforms to the event date.