The majority of the areas within the district held their qualifying matches in recent weeks at Carmarthen, Llanelli and Haverfordwest. A week after their main area championship, the six Llanelli schools were back at the Pemberton athletics track outside Parc Y Scarlets on 17th May for the cup match.

It was then on to five days later, the 22nd of May, where Brianne schoolchildren from seven schools headed to the Carmarthen Leisure Centre at lunchtime. Pembrokeshire Schools was in qualifying action on Monday 17th June, 2 days before the NASUWT finale. Unfortunately due to wet weather, the Pembrokeshire match began but was abandoned last week after a few events were completed. Despite this, five schools were able to re-schedule and go ahead 48 hours ago on Monday morning to complete. Speaking about the weather, this left the Ceredigion event sadly cancelled on Monday with the area looking at county results from before half term to decide on the teams going through.

The boys and girls' age groups were split into under 14 (year 7 and 8) and under 16 (year 9 and 10) where a total of thirty teams featuring in the Haverfordwest daytime sunshine and warmth.

The event programme was over three hours with the first event at 11.00am at the secondary school facility. The final relay concluded the day shortly before 2pm and saw the hurdles, 100m, 200m, 300m, 800m, and 1500m on the track. Meanwhile on the field, the javelin, shot, long jump, high jump, triple jump and discus was contested on all corners of the venue.

During the day, we saw several great races and performances as well as vocal supporters on the side supporting each other with a number of the top athletes from the Dyfed district out on show. Looking at team scores, several categories came down to the last few races including the very last relay race, so everything was to play for up to the very last few metres.

Schools from Queen Elizabeth, Dyffryn Taf, Dyffryn Aman, Bro Dinefwr, Haverfordwest High, Preseli, Aberaeron, Bro Pedr, Penweddig, Bryngwyn, Strade, Coedcae and Glan Y Môr were all top 2/highest finishers in their respective county and cup matches earlier on in May & June. As a result, these participating schools travelled from all three counties in Carmarthenshire, Ceredigion and Pembrokeshire to take part in this midweek fixture. 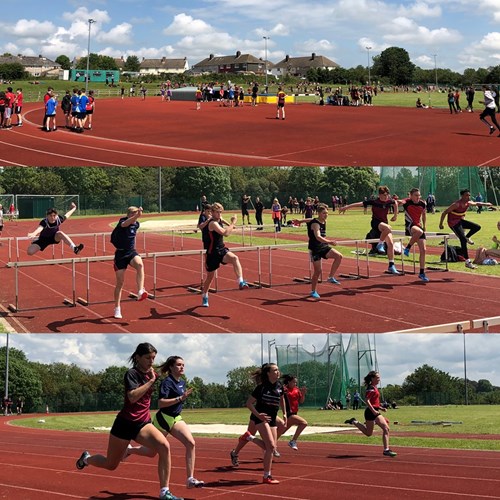 Elsewhere, 55-miles further East up the A40 and M4, the Afan Nedd Tawe District also gathered on the same day on Wednesday at Swansea University Athletics Track for their seven-hour cup final programme featuring all the secondary schools in the Swansea, Neath and Port Talbot areas.

All affiliated schools, more than 20 invited in total, in the ANT district headed to the Sketty Lane facility for a one day event and saw big numbers as it did at the Championships at the beginning of May.

On an action-packed day in Swansea, the competition began in the morning with the sprint hurdles before moving on to the 100m, 200m, 300m, 800m, relays and 1500m. There was also a 60m/100m race for IPC Disability girls and boys as well as field disciplines on offer including Long Jump, Discus, Shot, Javelin, High Jump and Triple Jump.

If you're looking for more photos and latest updates posted from Haverfordwest as it happened on Wednesday morning/afternoon, head over to our FACEBOOK, TWITTER @CarmsHarriers & INSTAGRAM feeds to have a look. Also re-tweeted on the Harriers Twitter Page are some individual posts by secondary schools who were competing.