Dyfed, one of the eight districts within Welsh Athletics, held the popular Dyfed primary schools athletics championships at Carmarthen on Wednesday 15th May and again delivered as competitors and spectators turned up in their hundreds.

CATCH UP FROM WEDNESDAY'S COMPETITION WITH OUR FULL REPORT, RESULTS, MEDIA & PHOTOS

After a fantastic cross country championships at the United Counties Showground, Nantyci on the first Thursday of April involving over 1,200 participants, the Dyfed Primary Schools Track and Field edition arrived on Wednesday 15th May just five weeks later a mile or so up the A40 in Johnstown.

For the last 25 years, athletics meetings have been arranged in Carmarthen and Dyfed, one of the eight districts within Welsh Athletics. The event headed back to the Leisure Centre Track in Johnstown and it was sponsored by our friends at McDonalds, which again delivered as children and spectators alike turned up in their hundreds to enjoy the occasion.

Ron Mounsey from McDonalds has been a great supporter of school athletics and cross country in Dyfed for a number of years and said: "We at McDonalds are very pleased and proud to once again be sponsoring primary schools athletics competitions staged in Dyfed this year.

"It is a privilege to see so many young children taking part in sport and enjoying the competitions that are on offer in West Wales."

On a pleasant, warm and sunny Wednesday evening in West Wales, the 32nd annual event attracted an impressive number of over 300 athletes and hundreds of spectators and teachers from all corners of Pembrokeshire, Carmarthenshire and Ceredigion primary schools. These championships have grown year on year since Hedydd Davies President of Carmarthen Harriers and Dyfed Schools Secretary organised the first event over twenty years back.

The aim is that school competitions will help youngsters to gain experience and attract pupils to join athletics clubs, with the potential for many to progress further in the future. Whatever their ability, the evening's programme was open to everyone to get involved in running alongside their friends and school mates whilst enjoying the race day atmosphere.

With the schools' track and field athletics season in full swing by now, these annual midweek Dyfed championships saw approximately 40 schools from across the three areas attend. Once again the track was full, car park packed and food was quickly sold, with plenty of local talent out on show watched on from the side lines by friends and family.

The event programme included a total of 14 competitions and saw the championships go on until shortly after 8pm. The 70m Hurdles and 100m heats got things underway firstly on the track before it was the turn of the 800m distance time trials. These were certainly races that turned out to be popular with a number of heats and finals having taken place, over 30 in total. The relays again attracted a number of teams with most of the sprinters and pupils getting their opportunity to be a part of a team in the classic 4 x 100m sprint time trial.

Over in the field, the high jump, long jump and shot put disciplines took centre stage at opposite ends of the arena for boys and girls and saw one of the best numbers for this event in the field of 95.

Cllr Gareth John (Deputy Mayor of Carmarthen) and Mr Gareth Morgans (Director of Education and Children Service for Carmarthenshire) were on hand to help with the presentation of awards to the top 4 in each event with a good crowd staying on to cheer the athletes who made it onto the podium.

The duo were impressed with the high standard of the championships and seeing all the children enjoying themselves.

Points were awarded in finals and after doing all the adding up, the scores were very close with the winners being decided up until the last event!

For the first time, the overall winning shield went to Ysgol Gynradd Llangadog who scored well in a number of disciplines including the shot, hurdles, 100m and relay. They won the 2019 title with 34 points. It was Ysgol Iau Llangennech, Llanelli who took the runners-up spot for the second year in succession keeping up their good form at these championships (26pts) and Ysgol Y Dderwen coming through to take the third spot overall with a number of top placings within their squad (23pts).

Ysgol Teilo Sant, Llandovery College, Johnstown School, Ysgol Rhys Pritchard, Tenby Juniors School, Ysgol Griffith Jones and Model School were all in the top 10 securing points tally of 12 to 22. It was great to see so many individuals scoring for their schools this year with more than 30 making it onto the table. 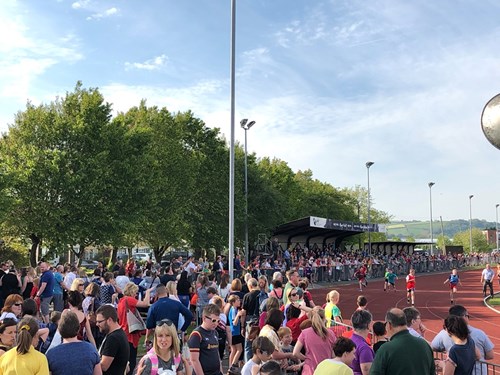 SCHOOLS ATHLETICS COMING UP THICK AND FAST IN THE DYFED DISTRICT

Dyfed primary schools will next head to Swansea University Athletics Track at Sketty Lane for the annual inter district match with West Glamorgan primary schools on Wednesday 17th July (5.15pm). The first four in the Dyfed championships have been selected to represent the district at the event with letters given out at presentation.

Elsewhere, athletics in schools is continuing in the next few days for secondary pupils with the staging of the Ceredigion, Brianne, Pembrokeshire and Llanelli Secondary Schools Area Matches which will lead onto the Dyfed championships in Carmarthen over a two day competition in June. Following Llanelli's staging at Parc Y Scarlets last Friday 10th May, Brianne hold their event at the same venue as the Dyfed primaries, Carmarthen on Thursday (16th May) followed by the Pembrokeshire match at the new Haverfordwest High School Prendergast Campus. After a visit to the home of Pembrokeshire Harriers next Tuesday (21st May), the area events rounds off with Ceredigion pupils who will travel down to Carmarthen on Friday 24th May.

THE FIRST FOUR MEDALLISTS FROM EACH OF THE FOURTEEN EVENTS LISTED

Looking for Results? Edrych am Ganlyniadau? Click the links below for the individual results, overall school teams and the list of medallists on the evening. Note: All links are versions 1 @ 21:30 15/05/19

Any queries on the results from the Dyfed Primary Schools Athletics Championships, please contact: results co-ordinator directly at nathanjones1995@live.co.uk

As usual, volunteers and helpers played a huge part in supporting the competition and organisers would like to thank everyone who helped in any way to ensure that Wednesday evening was once again a high quality occasion with great performances and team spirit all round. These include the Welsh Athletics officials and teachers/parents track judges recorders, field event judges, results team, marksmen, sponsors and presentation guests, St John Ambulance, Carmarthen Leisure Centre stewards and the Carmarthen Harriers members on refreshments.

Well done everyone! Da iawn pawb! We hope that you all enjoyed the evening's action and your visit to the Carmarthen track. We are looking forward to hosting a number of other events between now and the end of the summer season.