The 38th running of the Carmarthen Mayor's Races was held earlier today (Monday) and it gave the opportunity for the whole family to get involved. It took runners through the streets of the town centre with spectator views ideal out on the course to cheer the participants on.

The dry bank holiday conditions, despite the chilly wind, attracted runners and spectators alike to enjoy the day's activities and the race day atmosphere from all corners of West, South and Mid Wales.

It saw another bumper turnout ranging in ages from the two-year olds to the experienced club runners and over 60's. In the period 1982-2006 there were 25 Welsh road race championships held in conjunction within the Mayor's Race ranging from 10K up to half marathon and marathon championships.

With almost 800 running over the three-hour programme, the beauty of the Carmarthen Mayor's Race Fun Run is that they take place in the heart of the town centre, passes the shopping centre area and affords great opportunities to cheer on the runners, with race commentators Robert Lloyd and Marc Griffiths having the perfect views to name athletes, interview a few of the participants and commentate on proceedings as they developed.

The event once again raised thousands of pounds for several charities with many local groups and organisations benefiting with some of those in action dressed in fancy dress. Proceeds in 2019 go to Carmarthen Freshstart, Carmarthen Food Bank, Carmarthen Youth Opera and Talking Books Wales.

The Mayor of Carmarthen Emlyn Shiavone was on hand to start all of the races with the hooter and present medals and trophies to all runners taking part. All finishers who crossed under the Healthy Life Activities inflatable were presented with their own finishers medal by Shiavone alongside Tina Shiavone (Mayorees of Carmarthen) and Jeff Thomas (Deputy Mayor of Carmarthen). Presentation of trophies to the leading athletes were made formally across two award ceremonies on the gantry where parents, clubmates and friends watched on. 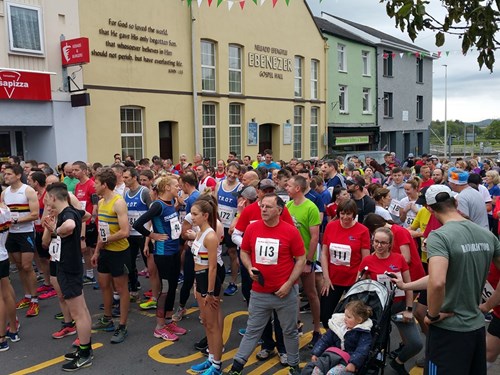 As in previous years, the day started with the Senior 5K fun run at 10.00am where runners started opposite the Carmarthen bus station and ran along the town's main roads a total of three times before the grand stand finish up at Guildhall square. The senior 5K was welcomed with chip timing and made officially online, meaning that all athletes were able to get their own individual time once they crossed and made it to the finishing line.

At the front end of the field, it turned out to be a thrilling battle as a group of five were neck and neck entering the final lap. The overall victory this year went to Carmarthen Harriers under 17 member Dafydd Jones (Carmarthen Harriers) in a time of 16 minutes 59 seconds. His club teammates Jack Tremlett and Frank Morgan recording 17:01 and 17:02 respectively ensured that the local club made it a clean sweep. Aberystwyth AC's Owain Schiavone (17:08) and Rob Davies from Amman Valley Harriers were next in fourth and fifth.

"It was great to run around the streets of Carmarthen with the crowds cheering us on" said Jones post-race. "I was very happy to win the men's 5K race, especially with fellow Carmarthen Harriers, Jack and Frank following in second and third place. I really enjoyed it. Thank you to all involved in organising the event today."

The female overall champion, Eva Edwards was also representing Carmarthen Harriers to make it a great start to the day. She finished in a high position of sixteenth overall and crossed in 19:13. Following closely behind onto the red carpet at the finish was Sioned Howells Amman Valley Harriers (20:13) and Dando Georgie Bridgend AC (20:46).

Edwards added: "It was a tough but very enjoyable course with plenty of hills and the support from the crowd made it even better. It was great to be a part of the strong Harriers team."

This was followed an hour later by a series of junior races for all ages and a look at the stars of the future. Featuring experienced competing athletes to those just making their first steps in running, the junior programme started with the boys and girls in year 1 & 2 followed soon after by the year 3 & 4 races. The halfway mark in the morning saw year 5 and 6 and the secondary year 7 & 8 events take centre stage. All of the year 1-8 participants completed the course twice.

Finishing off the action at lunchtime was a fun category for the nursery and reception children over 1 lap, where the young ones could run alongside their friends and family and feel part of the big day.

The vests of the Carmarthen Harriers club were clear to see along the streets with names being called out many times by the day's race commentators. A big well done to all the members who participated, we know that over twenty of the junior member section of the club were in attendance and several positioning in the top ten of their respective age groups. We hope that you all had a great time!

The event has also been covered for the press and you'll be able to find reports and images from today's event in the Carmarthen Journal / Llanelli Star (Wednesday 8th May) and the Carmarthenshire / Llanelli Herald Newspapers (Friday 10th May) - reporter Nathan Jones and photographer Darren Harries were out and about catching up with all the action. PICK UP YOUR COPIES THIS WEEK! In addition, media coverage & news stories will also appear in the South Wales Guardian and on the Llanelli Online Website and 7 Day Sport Website shortly.

Carmarthen Harriers Social Media Event Images: Have a look at some general photos (over 100) in full from the day in Carmarthen (all link pictures: Nathan Jones)

A big thanks again to Noelwyn and Sharon Daniel (Healthy Life Activities) and Carmarthen Town Council who has worked tirelessly to get everything ready and stage another success in the event. It would not have been possible to hold the Mayor's Race without all the volunteers, marshals, sponsors and staff from Carmarthen Town Council in front of and behind the scenes. The team look forward to seeing you all again in 2020!