On Bank Holiday Monday, A chance to catch up on a number of club and school events that has taken place up and down the country over the last fortnight at Cardiff, Builth Wells, Loughborough, Neath, Haverfordwest, Carmarthen, Llanelli, Talley, Belgium and Exeter.

Dyfed athletes and staff from more than 25 of the district's secondary schools & colleges have been busy recently over the last fortnight at their area athletics championships held at Carmarthen, Haverfordwest and Llanelli in the space of 14 days featuring participants in Years 7, 8, 9, 10 and 11.

There was plenty of local talent and future school stars out on show during the four meetings with over 1200 youngsters taking part.

Schools will be / have been in action at the NASUWT Under 14 and Under 16 Cup competition which sees the top 2 head to the grand finale with the final to be held very soon. The district's final will be down in Haverfordwest High School and will take place on Wednesday 19th June (12:00pm) with the Welsh Schools National Final to come in Brecon in mid July for the leading teams who come out on top.

The top finishers in each event have now qualified to compete and represent their area at the big Dyfed Secondary Schools Athletics Championships at Carmarthen Leisure Centre over a two-day weekend. It is being held on Friday evening 7th and Saturday 8th June and promises to be a great day of quality athletics in West Wales. Following the championships, a team will be selected for the Welsh Schools National Athletics Championships in Cardiff on Saturday 6th July.

READ THE FULL REPORT & LOOK AT PHOTOS FROM CARMARTHEN, HAVERFORDWEST & LLANELLI WITH THIS NEWS STORY

The opening #RunWithTheWind Series went to the new blue track at Cardiff International Sports Stadium on Wednesday 15th May with nearly 200 athletes from all clubs in midweek action and over 100 new personal best times recorded in an ideal competition for making a start ahead of major championships and league fixtures. Event 2 for 100m and 200m will be on Wednesday 5th June.

The 2019 edition headed back to the Royal Showground in Builth Wells on Saturday 18th May for the 10K and half marathon races. In addition, it saw events for the younger generation and here we saw some dominant displays from the junior Harriers.

In the 3K race to begin the programme, five out of the top seven boys were from the Johnstown club led in by runner-up Iwan Thomas who recorded 13.28.. Just behind him in 13.44 was William Coles who joined Thomas on the podium alongside Maldwyn Harriers' Aled Breeze. Fourth and Sixth positions were occupied by Steffan Davies (13:46) and Alex Coles (14:36) with Jac Jones taking seventh and a comfortable top ten (14:41). Martha Morgan was the second girl to finish and won silver in a time of 18:32.

The Cwrt Herbert Athletics Track in Neath become the first venue of 2019 to host the Welsh Athletics U17, U20 & Senior League on Sunday 19th May after match 1 at Newport at the end of April was cancelled. It saw athletes involved from more than 10 clubs with events including the 100m, 300m, 400m, 800m, 1500m, 3k Walk, Sprint Hurdles, Sprint Relays, Long Jump, Triple Jump, Pole Vault, Javelin, and Discus.

Morgan Batten and Trystan Leech went up the M4 for the season opener and both came away with encouraging results. Leech ran 52.90 in a fast opening heat of the 400m whilst over in the field, Batten threw a best of 43.44m in the under 17 javelin with his longest throw coming in the last round.

Ahead of the Talley 5K below, Sarn Helen hosted the 1.5 mile, 9 mile and 16 mile races with over 100 in attendance on Sunday 19th May. The 1.5 mile primary ages saw Cai Allan in fourth and the first primary school athlete behind the three secondary Sarn Helen members (13:24). Into the 9 mile and this is where Elizabeth Tremlett claimed the female title by nearly six minutes with 1:09:39. Wendy Price battled the longest of the distances in the 16 mile race. In 19th overall, she was the first female 35 in 2:13:00.

Friday 24th May at Talley just up the road from Llandeilo, Clwb Sarn Helen organised the 2019 Talley 5K Ras Y Llychau with a good number of children and adults having ran in this annual May event.

It turned to be a good evening for the Carmarthen Harriers club with several vests out on show including some of those youngsters competing in the Louise Arthur too a day later. Plenty of trophies came back down the A40 after its conclusion!

First off at 18:30 was the 1 Mile fun run for children and the top three overall finishers were made up from the Harriers. The Coles brothers Alex and William competed the one-two in 6:15 and 6:19 respectively and just behind them was Cai Allen in 6:51 to finish in third. Eighty Six aged between 2 and 11 years old completed the course and received their finishers medal.

157 runners of all abilities (20 up from 2018) took to the start line of the 5K race heading out on the main road and back down the country lanes into the finish. The win went to Rob Davies of Amman Valley Harriers who turned out in their numbers for the local race. His time was 16:51 30 seconds ahead of runner-up Christian Lovatt (17:34).

David Jones was the first Carmarthen Harrier to return home and did so by taking third position in 17:46. The top ten was completed by Tom Sinton, Robert Kestin, Dafydd Lloyd, Llyr Roberts, Ian Bird, Alan Davies and Scott Price, who was the next Harrier finisher and took second in the under 18 category in the process. Huw Davies was another to compete and clocked 20:22 in finishing second in the M50 age group.

Meanwhile in the women's race, there was some great results by winning F35 athletes Elizabeth Tremlett (20:00) and Wendy Price (20:47) who were the second and third home overall behind Amman Valley Harriers' Sioned Howells.

Thanks to the organisers from Sarn Helen for another well run event in Talley!

Almost 400 children from nine junior Welsh clubs took to the track and the runways to represent their club at the second round of competition at the Welsh Junior League / Louise Arthur League for under 11, under 13 and under 15 youngsters on Saturday 25th May.

Again taking place on the second Bank Holiday weekend in May in the space of three weeks, the next West Division match on the 2019 summer calendar arrived at the home of Carmarthen & District Harriers Athletics Club following the opening round down the A40 at Haverfordwest High School with the Pembrokeshire Harriers as hosts.

With trips to Swansea and Neath coming up in the next two months, it was our turn to welcome our friends from Swansea Harriers, Pembrokeshire Harriers, Neath Harriers, Llanelli AAC, Bridgend AC, Pontyclun AC, Barry & Vale Harriers and Brecon AC to the Leisure Centre facility in Johnstown on what was a dry and relatively warm Super Saturday.

It's been a busy last eight days for under 20 Welsh & British International athlete Ben Thomas and his coach Neil Thomas who have been clocking up the miles by travelling to two events at Loughborough and Belgium in the space of six days. First up on 19th May, he went on the 3000m Steeplechase start list at the Loughborough International Match which Wales were involved in. Joining his country teammate in Ciaran Lewis, Ben came through for 9:19:54 which would get even better the following weekend...

Welsh Athletics supported Thomas to the International Flanders Athletics Meeting in Belgium on the evening of Saturday 25th May. The journey out was all worthwhile as he broke another 3K SC club record and recorded a 12-second PB improvement with a time of 9:07:78 for eleventh. That time now ranks him 1st in the UK and 4th in Europe, arbennig!

Made up of athletes from Pembrokeshire Harriers, Carmarthen Harriers, Neath Harriers, and Llanelli AAC, those who wore the red and black vests performed well again in the South West. It's set to be a grand stand finish between Team Avon. Team DC & Cardiff Athletics and Swansea Harriers for the top three spots, but for those in the West, the composite team will start looking ahead towards the promotion match where retaining their premier division status will be the aim at the end of July.

Dafydd Jones was involved in possibly the most exciting finish of the day in the under 17 men's 800m where the top four were seperated by only two tenths of a second. There was enough left for the final sprint to take victory in 2.02.69.

Elsewhere, Lili Church was in fine form at the under 17 women's high jump, winning the event with a clearance of 1.66m. This was then followed by a throw of 27.10m in the javelin.

The final match of three is to come at Cardiff International Sports Stadium on Sunday 30th June then the fixture on 28th July is to be confirmed depending on where each of the teams finish in the league table to see whether it's the regional final or the promotion match.

Club Endurance athletes Dafydd Jones, Frank Morgan and Iwan Thomas made the journey earlier on Saturday, 1st June to the BMC event in which more than 400 athletes had registered. 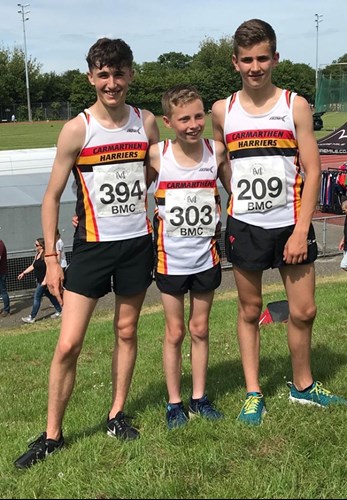 Out at an event on the track/road running for the club? Sometimes it's impossible to look up every event, so please send your result & photo if available to nathanjones1995@live.co.uk