For the 32nd successive year, Dyfed Primary Schools once again turned out in their numbers on Thursday evening, 4th April at one of the most popular sporting events currently being held in Dyfed and West Wales. It gave youngsters in four school year groups the opportunity to get involved in running and enjoy the race experience alongside their school mates.

A total of over 1,200 runners (see below for individual race numbers) from more than 60 Dyfed primary schools descended on the United Counties Showground in Nantyci on the outskirts of Carmarthen to compete in the annual District cross-country championships, organised by Hedydd Davies. The car park was full, all kinds of food quickly sold and plenty of local West Wales talent out on show.

Despite the wintry conditions and wet weather earlier on in the day, the turnout was fantastic with the sun braking through the clouds just in time. Runners, officials and spectators came from all corners of the three counties in Dyfed which are Carmarthenshire, Pembrokeshire and Ceredigion.

The first of the races began slightly later in 2019 at 17:00 with the event being held three weeks later than recent years because of the Easter Holiday timing. First off was the first glimpse of the year 3 athletes who were most probably competing for their school for the first time. It then went up to year 4 and year 5 before the year 6 runners took part in the cross-country championships for the final time before they join the various secondary school leagues next season.

A total of eight races was on offer for the spectators during the evening's programme, with the year 3 and year 4's completing 2 large laps whilst the year 5 and year 6's had an extra small lap at the beginning. The finish was situated right in front of the main grandstand, where it provided an ideal opportunity for supporters to cheer and encourage the youngsters on.

The youngsters taking part were supported excellently by year 7, year 8 and year 9 endurance runners at Carmarthen Harriers who helped out as hares and back markers to ensure that everyone got to the finish line. A great job was done by Frank Morgan, Jack Thomas, Steffan Davies, Jake Lynock, Ifan Bowen, Amy Greatrick, Erin Morgan and Frances Mackie who took the lead in all eight races and were more than happy to help. 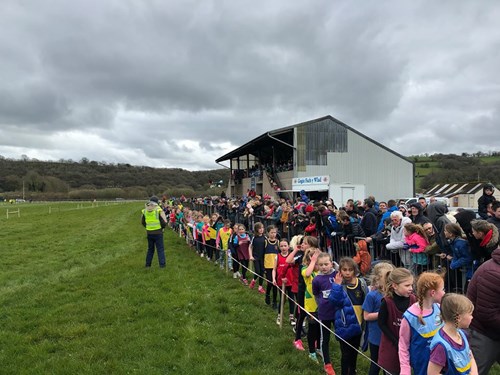 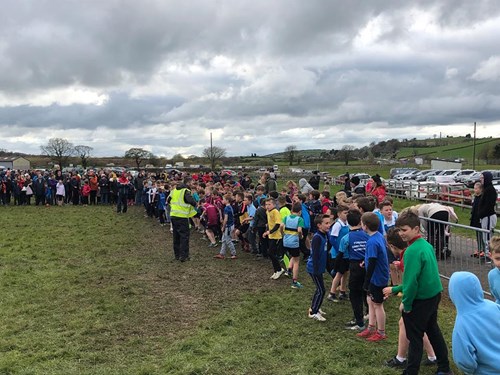 The championships in Nantyci were this year kindly sponsored by Welsh Athletics and McDonalds Carmarthen.

Ron Mounsey from McDonalds has been a great supporter of school athletics and cross country in Dyfed for a number of years and said: "We at McDonalds are very pleased and proud to once again be sponsoring the Dyfed Primary Schools Cross Country Championships.

"It is a privilege to see so many young children taking part in sport."

The first ten in the year 6 races and the first 2 in Year 5 have been invited to compete for Dyfed primary schools in the annual inter match with West Glamorgan primary schools at Ashleigh Road Playing Fields, Swansea University next Monday (8th April) with the start at 5pm. Follow the Latest on the Harriers Social Media Pages on Monday afternoon.

Team Win: Ysgol Caer Elen were the first team winners of the 2019 championships, led in by Charlton in fifth individually. The score of 65pts was 4 ahead of Ysgol Y Dderwen (69pts) in second led in by sixth-placed Seren Bowen with Gymraeg Aberaeron collecting their first bronze medals in third spot (77pts).

Team Win: Ysgol Y Dderwen picked up their first set of gold medals in the year 3 boys with a points tally of 38. Behind them occuping second was Pembroke Dock (87pts) and Gymraeg Aberaeron matching the girls' result in third (92pts).

Team Win: It was no surpirse to see Ysgol Y Dderwen (22pts) win this age group thanks to their three scorers finishing in the first twelve. Joining Jones was Ana Jones and Martha Bowen. Llanelli school Iau Llangennech were silver medallists (44pts) and Ysgol Bro Brynach coming through to take a comfortable third (66pts)

Team Win: James shortly after receiving the gold medal for winning the race won a second in the team event with his Ysgol Y Dderwen teammates (50pts) with Johnston School (56pts) and Ysgol Griffith Jones (71pts) making their first appearances up in the presentation stand. 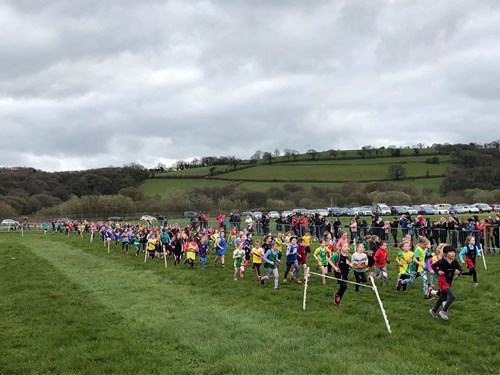 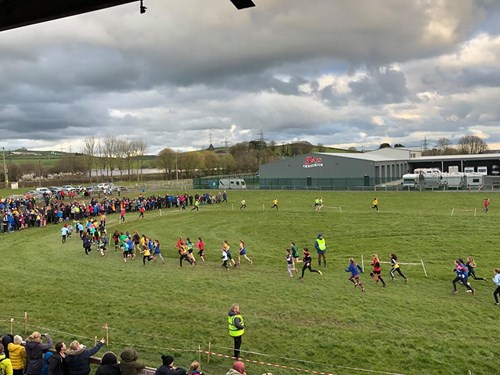 Team Win: It was Ysgol Llangynnwr (42pts) who took the year 5 girls' title with Hughes being the first scorer in fourth. Cleddau Reach school including Sophie Cox in thirteenth were in second (62pts) and Ysgol Y Dderwen (65pts) coming away with third this time.

Team Win: The overall winning shield was confirmed for Ysgol Y Dderwen in their fifth win of the afternoon with Jones backed up by Marged Jones in eighth (27pts). Narberth school scored 55 points for second in their first award followed by Gymraeg Aberaeron on 62pts.

Team Win: The fourth and final school to be announced as a winning team was Prendergast school (45pts) in the concluding race. The duo of Josh Barrett and Daniel Isaacs in 10th and 11th respectively contributed towards this. Hendy School and Ysgol Griffith Jones picked up the last few awards at the end scoring 90 and 93.

As in previous years, there were team awards up for grabs with three to score from each school. In the team competition, there were four different school winners:

Pupils from Ysgol Y Dderwen were again on top form in the cross country and dominated team categories, winning five out of the eight available. As a result, the Carmarthen school were announced as the overall school shield winners, defending their title won 12 months ago in 2018. The shield was presented to the youngsters by Cllr Mansel Charles and Bethan Charles-Davies. Congratulations / Llongyfarchiadau! 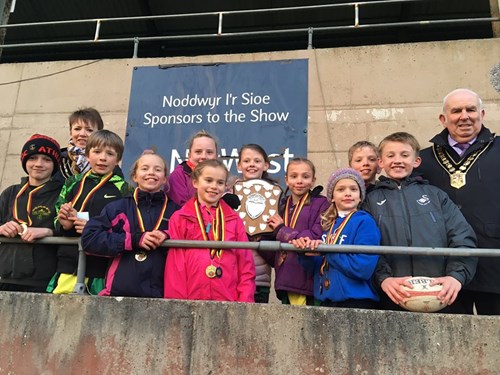 With such big numbers in all of the races again this year, the top 15 individuals were recorded at the finish line as well as the top 10 school teams. All children were given their finishing ticket on the line and can compare them to the number of finishers listed above. View the first 15 results on the PDF link below:

Missed any of this year's event? Pick up your local newspaper or visit our social media pages!

The Harriers Social Media Officer Nathan Jones was out and about on the course providing updates for those following online at the venue and back home in picture, text and video. Please visit our Facebook, Twitter, Instagram and YouTube pages for more coverage from this year's Dyfed primary schools' championships. Ewch draw i dudalennau Facebook, Trydar, Instagram a YouTube y clwb am mwy o luniau a newyddion o bencampwriaeth traws gwlad y flwyddyn hon.

Press reports will be provided in all local newspapers across Carmarthenshire, Pembrokeshire and Ceredigion over the 10 to 14 days, keep an eye out in your local newspaper! Where you are likely to find a write up on the cross country in due course: 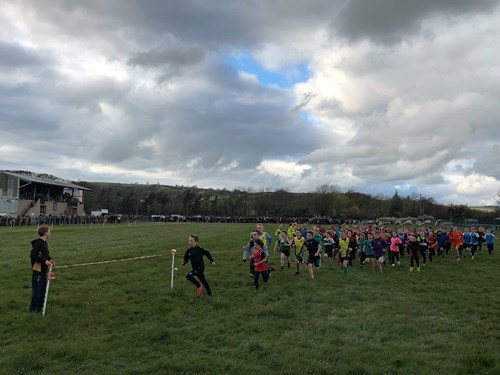 We hope that you all enjoyed the evening and look forward to seeing you all back in a future competition! In the meantime, we are next building up to the Dyfed Primary Schools Athletics Championships which will be back next month at the athletics track in Johnstown (Leisure Centre).

First Details will appear on this website in due course. 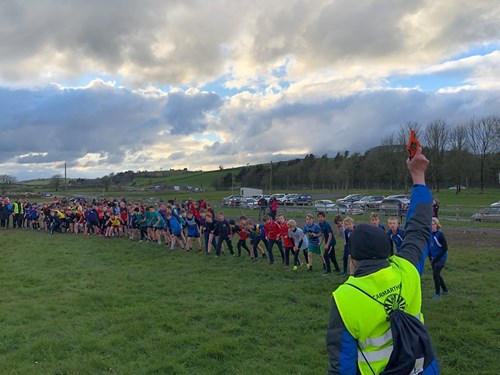