This month was scheduled to see the 2021 Welsh Schools National Cross Country Championships return to Brecon. Unfortunately, because of the ongoing COVID-19 restrictions, the event was cancelled in 2021.

Here's a look back at the 2020 event report when it was held in March (11/03/20) which turned out to be the final fixture before lockdown was introduced.

School Pupils got their moment to shine as one of Welsh Schools Athletic Association's biggest competitions in the year returned to Brecon as the end of the winter season draws nearer.

Eight districts were represented on the day from Afan Nedd Tawe, Cardiff & Vale, Dyfed, Eryri, Glamorgan Valleys, North East Wales, Powys and South East Wales. Each District had held qualifying selection races in January and beginning of February for the right to battle it out against other school pupils across Wales.

Each team could field up to 12 athletes per age group with the first six finishers scoring for their District in the team element.

There were a total of eight races featuring around 550 athletes, which included the year 7 races who made their first appearances at these National Championships since moving up from primary level. There were also junior, middle and senior categories which meant that all secondary school ages could get involved.

Dyfed Schools had another successful day at the championships with the best results of the day coming from the year 7 boys, junior boys and middle boys age groups, where they were all victorious in the team results and announced as champions. The middle boys category was particularly impressive, with the six scorers finishing in the first eight spots whilst the first four finishers in the Year 7 boys' race were occupied by Dyfed schools athletes!

Those wearing the vest of the District qualified for the Welsh Schools National championships through the Dyfed schools cross country championships race, which took place at the Lower Racecourse in Haverfordwest, Pembrokeshire. 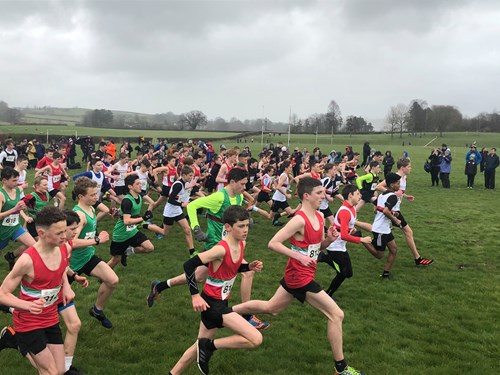