A look back at the 2019 Dyfed Secondary Schools Track & Field Championships at Carmarthen...

Last week (Wednesday 3rd June 2020) was due to see the Dyfed Secondary Schools Track & Field Athletics Championships return on a brand new midweek date but with the ongoing COVID-19 pandemic, all school events are now cancelled in 2020.

Here's a look back at the 2019 edition which returned to Carmarthen over two-days in June... we look forward to its return next year in summer 2021. 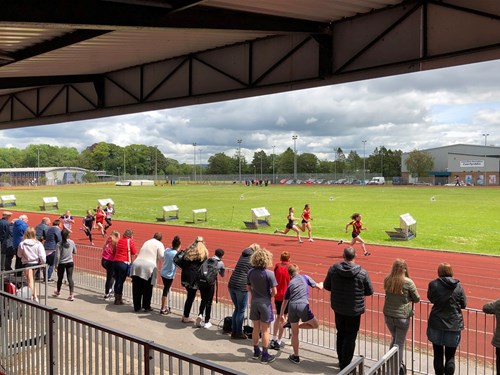 It saw approximately 350 athletes from Pembrokeshire, Brianne, Llanelli and Ceredigion taking the spotlight and several hundred parents and teachers attend throughout the weekend to support the young athletes. Whilst there were plenty of club runners from Pembrokeshire, Carmarthen, Llanelli and Swansea present, it was also the opportunity for the less experienced schoolchildren to take part in a major competition.

The top finishers in each event from the four area championships that were held in May at Carmarthen, Llanelli and Haverfordwest qualified to compete and represent their area at the two-day weekend programme on the track and in the field.

24 hours before the West Wales Championships at Swansea, the Pemberton Athletics Track outside Parc Y Scarlets in Llanelli hosted the first of four area matches as the six schools made the short journey across town to the home of Llanelli Athletics Club for their first visit to the venue in seven days. Next up back down the A484 six days later saw Carmarthen Leisure Centre Athletics Track in Johnstown host the first of two at the venue, the Brianne Championships was first to take place.

The brand newly named school Haverfordwest High on the Prendergast Campus in Haverfordwest was the venue for the ten Pembrokeshire Schools in the penultimate fixture. Then to round off a great two weeks, eight Ceredigion Schools travelled South for their six-hour match using the facilities at Carmarthen Leisure Centre. 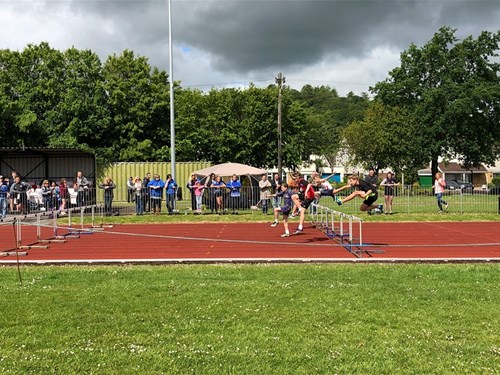 The action got underway at a rain-soaked Carmarthen on Friday evening (7th June) where the first 5 events of the 2019 championships was held ahead of the big day. These included the 300m and 400m distance hurdles, 1000m Walk, 3000m along with the hammer in the field.

Around 14 hours later for the school athletes, parents and teachers, all roads from Pembrokeshire, Ceredigion and Carmarthenshire led to the Carmarthen Leisure Centre in Johnstown early on Saturday morning (8th June) where the first set of events began at 10.00am on the field with the track hurdles heats a short time after.

The races kept on coming and after a series of heats, time trials and straight finals, the competition came to a close at 17:30 at the end of a long but exciting eight-hour timetable.

Some of the event disciplines completed throughout the morning and afternoon on the running track were the 100m/200m/300m/400m sprints, sprint hurdles, 800m, 1500m and steeplechase. The ever popular events were back on the field with a number of athletes contesting the long jump, triple jump, high jump, shot, javelin and discus on all four corners of the venue.

The Dyfed Schools team for the Welsh Schools National Track and Field Championships held on Saturday 6th July at Cardiff International Sports Stadium, was selected straight after the Dyfed Championships.