As all events are in the Swansea, Neath and Port Talbot areas by now, they are sponsored by Apollo Teaching Services and the district are grateful for their continued support all year round to ensure that events can happen. 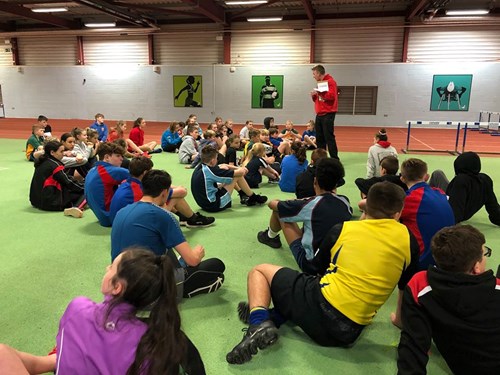 The midweek trial was open to school pupils in years 7 & 8 (under 13) and years 9 & 10 (under 15) with events varying for each category. With each competitor required to compete in a minimum of four events, it was a very busy evening of action for all concerned over the three-hour programme.

Seventy athletes took part with a good number of parents and teachers turning out to support the participants in a busy period where the cross country trials will follow early next year. Fifteen schools from the District were represented this year, competing from Bishopston, Gwyr, Bishop Gore, Gowerton, Cefn Hengoed, Olchfa, Bishop Vaughan, Birchgrove, Dwr-Y-Felin, Bryntawe, Morriston, Pontarddulais, Bro Dur, Ffynone and Llangatwg.

It all kicked off at 5:30pm and thanks to the support of the volunteers and officials on the evening, concluded with the 2 and 4 lap finals at 8:15pm.

On the track, it saw the indoor favourites take place including the Obstacle Race followed by a series of 2 Lap, 4 Lap and 6 Lap heats and finals for the remainder of the evening. With a number of close finishes in a number of the races, each position and every time counted with spaces in the county team up for grabs in March.

Elsewhere, the venue was also busy at the respective field discipline areas. Held away from the sprint events were the Vertical Jump, Shot Put, Speed Bounce, Standing Long Jump and Standing Triple Jump.

Under 13 athletes competed in two track events and two field events, whilst the under 15's were required to compete in both the 2 lap and 4 lap on the track alongside two field group events. 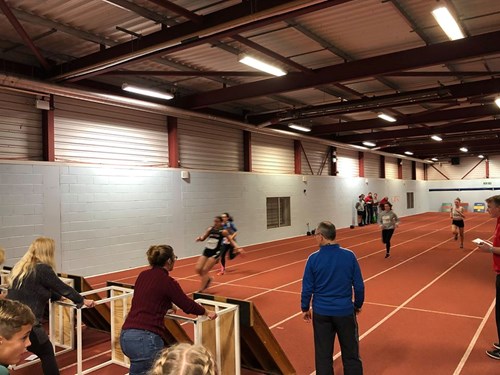 The results of Wednesday evening will be used as the basis of selection for the Afan Nedd Tawe team to compete in the Welsh Schools Sportshall Athletics Championships at Cwmbran Sports Centre in March 2020. This will in turn act as a qualifier for the UK final in April which will be held in Manchester over two days towards the end of the winter campaign.

Meanwhile, the Dyfed Schools Indoor Sportshall Competition is planned to return in the New Year (venue & date TBC) with further details to follow.